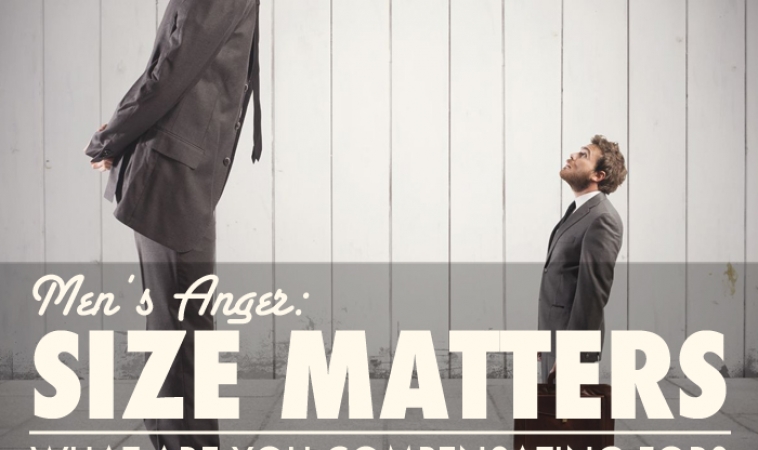 I’ve been contemplating the concept of compensation, particularly around the issue of anger in men. While there are many causes for anger in men, I’ve distilled my thoughts to the issue of size. It matters. Think about it. Why would a man need to pump himself up- his ego, his assertions, perhaps his force? It’s not much of a stretch to see that it’s to compensate for the experience he is having of feeling small- diminished, powerless, not in control, etc.

It’s just like the typical small dog personality, who is obnoxiously aggressive. I’ve seen men walking around with unneutered pitbulls with very heavy chains and my first thought is often, “I wonder what he’s compensating for”? Maybe nothing, but it really looks like posturing behavior to me. I’m so curious about men who make overt statements or have bumper stickers about the Smith and Wesson they are carrying. I have an in-law that has been just absolutely certain that President Obama was going to come knocking on his door to take his guns away. He lives with so much fear about the world and anxiety about his security. Feeling so small and powerless would certainly justify the need to create balance with something to make one feel big. It makes perfect sense. But only from that limited perspective.

Sometimes the situation of “small becoming big” is subtle, as in a squabble with a friend or partner. We get scared, we get our ego hurt- neither of which is socially acceptable for men to admit, even to ourselves, so we quickly move into a defensive position. Men do this to each other as well. Spend some time observing or listening to men when they first meet. Within moments, one man goes “one up” on the other guy, seemingly showing his narcissistic need to be “bigger” or dominant over the other. But what he may be demonstrating is his smallness- his lack of confidence, his low self-esteem or insecurity about his accomplishments. I’ve seen this for many years in the gay community. Many gay men have stereotypically been known to be bitchy, quick to criticize and condescending. Is this a way to rise up against oppression? And how will this change as attitudes toward homosexuality evolve?

Getting Big to Stop Feeling Small

I often see men with obvious psychoses, walking around downtown, some expressing delusional angry arguments, others posturing in some provocative clothing or other props. Perhaps they’ve “lost it” because of some social or personal injustice that moved too deep into their psyche. Obese men come to mind here. It’s long been been said that women overeat to compensate for feelings of low self-esteem, not feeling good about themselves or to insulate their pain. Obese men are quite similar, and often are stereotyped as lazy, ineffectual, and non-productive which REALLY falls outside the acceptable measures of manhood.

A strange juxtaposition to this size issue is the phenomenal explosion of young men going to the gym, using bodybuilding supplements and steroids to “get big”. Having an average size bicep is no longer okay. Men are going to extreme measures to bulk up. It seems curious that it comes at a time when there is great uncertainty about the role of being a man in the world today. Is the same true about those young men who make and, god forbid, carry out, plans for violent destruction? They must feel so insignificant, without a voice.   While I find their behaviors abhorrent, I feel sorry for them and all the others under the tip of the iceberg, who feel similarly.

Finally, what about the economic and political equivalents? The USA doesn’t function at the top in many areas- healthcare, education, employment, etc. Is it possible that we exercise our “might” to compensate for the realization that we have slipped from the position of top dog?

More than sympathy, I’m saying there may be more, actually less, than meets the eye. How might it change the face of violence if we were to really know the experience of feeling small as many men do? There has historically been a great deal of focus on problematic issues of men’s violence and the consequences of this violence (what I’ve described as getting big). In naturopathic medicine, we are taught to treat the cause, not simply mask symptoms. I’m asking us all to consider addressing the smallness that men experience, rather than the symptoms that manifest. I suspect it could be transformative, for all of us.