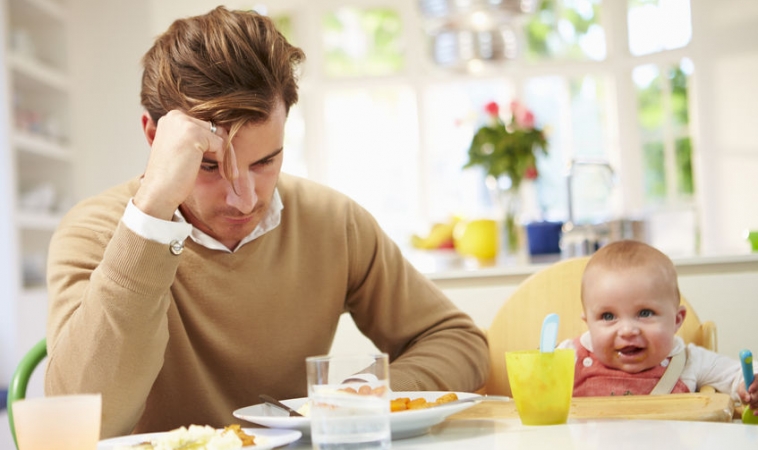 Postpartum Depression is a Growing Concern for Men

I read an interesting article that discussed postpartum depression. Only, this article wasn’t discussing its effect on young mothers, but rather, new fathers. Apparently, postpartum depression is a growing concern for many men. It is an interesting and complex topic, which, seeks to undermine many masculine stereotypes. Men are just as susceptible to fluctuations in hormones as women, and these hormones can cause real changes in mood and personality. The main difference is a man’s willingness and openness to discuss them, and seek help if needed.

It is not uncommon for women to experience a period of time shortly after delivery of decreased mood, as the rush of emotions from the climax of pregnancy wane. When this sadness becomes more severe and begins to affect daily life, and transition into motherhood, it is termed, postpartum depression. It is a serious condition and can necessitate professional help. Men can also experience this type of depression. It is thought to coincide with a dramatic decrease in testosterone and increase in estrogen following the birth of a child.

Unlike maternal postpartum depression, paternal postpartum depression usually begins 3-6 months after delivery. Roughly 14 percent of new dads will experience the condition. The symptoms in men may include changes in sleep pattern, interest, concentration, and appetite. The changes are often more insidious and may coincide with changes that are occurring due to the new child – such as sleep changes due to colicky baby, or the stress of taking care of a new family member. The argument could be made that these symptoms are arising from an inability to communicate the emotions surrounding the changes in the household that are occurring.

Communication is key in this equation. Men often feel as though they have to figure things out by themselves. They often feel as though they cannot talk about their emotions. There is a cultural stigma that to admit to this sort of thing is “unmanly,” and so it goes unacknowledged. If indeed there is a problem, or difficulty adjusting, pretending it’s not real isn’t going to make it go away.

Men in this scenario need to be supported. Men need to consider the importance of talking to someone about what is troubling them, even if those troubles are incredibly personal and disturbing. A close friend or family member can be a valuable asset in situations like this for men, but they may need to seek professional assistance as well. If therapy is needed, they need to be supported and assured that their masculinity is not in question.