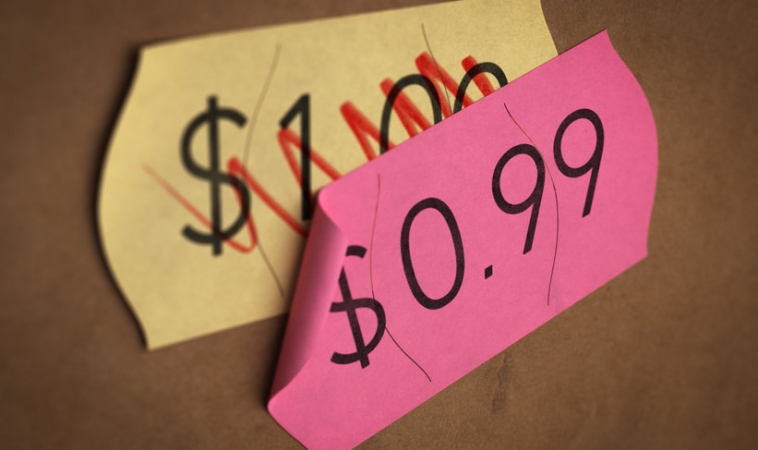 Setting a price just below a round number ($39.99 instead of $40) may lead consumers into thinking a product is less expensive than it really is — but it can sometimes backfire on sellers, a new study shows.

Researchers found that this “just-below” pricing makes consumers less likely to upgrade to a more expensive version of the product or service, such as a bigger size or higher-end trim on a car.

The just-below price that makes a product itself seem like a good bargain also makes the leap to the premium product seem too expensive, said Junha Kim, lead author of the study and doctoral student in marketing at The Ohio State University’s Fisher College of Business.

“Crossing that round number threshold makes a big difference for consumers.”

Kim conducted the study with Joseph Goodman and Selin Malkoc, both associate professors of marketing at Ohio State. Their research was published yesterday (Aug. 26, 2021) in the Journal of Consumer Research.

The threshold-crossing effect held for everything from coffee and face masks to streaming services to cars and apartments in seven different experiments, Goodman said.

“We found this effect works in experiential categories, as well as products. It replicated very consistently,” he said.

In one field study, the researchers set up a coffee stand on the Ohio State campus for two days, rotating the prices regularly. About half the time, they offered a small coffee with a “just below” price of 95 cents or a larger cup upgrade for $1.20. In order to choose the upgrade option, customers had to cross that $1 round-number boundary.

While the larger cup was now more expensive than before, so was the smaller cup. Critically, both prices were on the same side of the $1 boundary, which the researchers predicted would make customers more likely to choose the upgrade.

How did customers respond? Well, 56% of them upgraded to the larger cup when they didn’t have to cross the round-number boundary to upgrade ($1 to 1.25). But only 29% did when the smaller cup was at the just-below price of 95 cents and they had to cross the $1 threshold for the larger cup.

“In other words, we sold more of the large coffee when it was objectively more expensive than it was earlier ($1.25 vs. $1.20),” Malkoc said. “It was amazing how increasing prices — from a $1.20 to $1.25 — actually increased sales. It is a testament to how strong the effect was.”

In one study in the lab, college students were more likely to say they would choose a more expensive car and apartment option when the base price was just above a round number rather than just below. That included scenarios where participants had multiple upgrades to choose from.

These findings fit in well with studies that have found threshold-crossing effects in other parts of life, Kim said.

“Research has shown that going across a state boundary makes a destination seem farther away,” Kim said. “It is crossing that threshold that makes a difference. In our studies, the round number is like the state boundary, magnifying the perception of a difference in price.”

One reason that this effect works so well is that people often don’t have a good idea of what the “right” price of a product or service should be, Goodman explained. So consumers look for some context to help understand if what they’re buying is expensive or inexpensive.

“For many of the things we purchase, price is perceptual. We have a feeling about whether the price is right or not,” Goodman said.

“In our study, people often said an upgrade purchase seemed less expensive when the base price was above the round number, even though it was objectively more expensive.”

There are some conditions where the threshold-crossing effect doesn’t happen. One is for small price differences on expensive items. It also doesn’t work on people who are familiar with prices for a product or service — for example, those who book hotels on a regular basis.

People who know prices well aren’t affected because they don’t rely on their perceptions, as many of the participants in this research did, Malkoc said.

“As consumers, we need to realize that our perceptions are often flawed. We need to rely on actual numbers and not just our sense of what the numbers are,” she said.