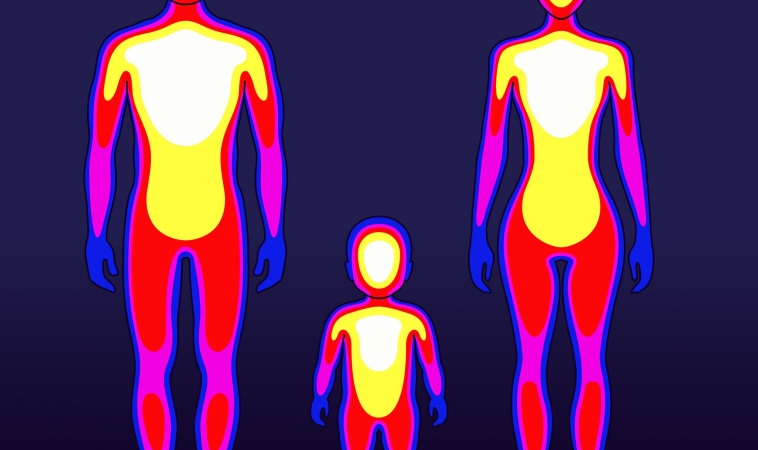 The brain mechanism that enables us to maintain a constant body temperature may also be the key to rapid weight loss, a new study finds. In experiments involving mice that were given a calorie-restricted diet, scientists at Scripps Research discovered that blocking a brain receptor that normally regulates body heat resulted in significant weight reductions.

The findings will be further explored as a potential treatment approach for obesity, which the World Health Organization has called a global epidemic. Obesity affects virtually all age and socioeconomic groups–increasing risk for heart disease, stroke, diabetes, cancer and many other serious health conditions.

“Up to 50 percent of what we eat every day is used as energy to maintain body temperature. But when food is scarce, mammals adapt by lowering their temperature, limiting energy expenditure and the loss of body weight,” said Bruno Conti, PhD, Scripps Research Professor.

Some species, he notes, can go into complete hibernation. Of course, humans don’t hibernate when they’re on a calorie-restricted diet, but they do naturally experience a lower body temperature just like other mammals. And that makes it harder to lose weight when on a diet.

“It’s a basic survival mechanism,” Conti says. “The body is saying: Let’s save energy today and maybe we will find food tomorrow.”

A continuation of their earlier research on lifespan and aging

In a continuation of their earlier research on lifespan and aging, Conti and his team investigated the cellular mechanisms that regulate the body’s cooling response to calorie restriction. Biological data obtained in collaboration with the Scripps Research lab of Gary Siuzdak, PhD, suggested the possibility that opioid compounds that naturally occur within the body could be mediating these effects.

Conti’s team then wondered if by blocking the kappa receptor, the body would continue to burn up calories to regulate heat even when food was restricted. “We developed an experimental protocol that would allow us to determine what changes were happening as a result of body heat regulation, not diet,” says Rigo Cintron-Colon, PhD, first author of the study.

In one set of experiments

In one set of experiments, the scientists observed two groups of lean mice that had already been on calorie-restricted diets for six weeks. One group was then treated with a drug to block the kappa receptor. The control group had adapted to the new diet and weight loss plateaued, while the experimental group showed greater energy expenditure and lost an additional 6 percent of body weight.

“When we blocked the kappa receptor, the animals did not lower their temperature during calorie restriction and lost more body weight,” Conti says.

Similar results were obtained with mice that had developed diet-induced obesity. Blocking the kappa opioid receptor during calorie restriction nearly doubled the body weight loss that the obese animals would normally undergo if their receptor was functional. However, when animals were allowed to eat freely, blocking the kappa opioid receptor had no effects on body temperature and did not alter the normal rate of body weight loss.

This is important, Conti says

This is important, Conti says, as it tells us that kappa opioid blockers are effective in both lean mice and obese mice, but that the medicine is able to affect body weight only in animals that are dieting.

The findings suggest a possibility that by translating these findings into humans, a pharmaceutical product may be able to help those who are struggling to lose weight, despite their adherence to a calorie-restricted diet. As a next step, Conti would like to explore whether existing medicines that are known to block the kappa receptor could be re-purposed and refined to safely treat obesity.

“The tools to interact with this mechanism may already be available, and if they are, they may be able to translate quickly into a medicine,” he says. “Unfortunately, for many people who are obese, losing weight isn’t as simple as eating less.”