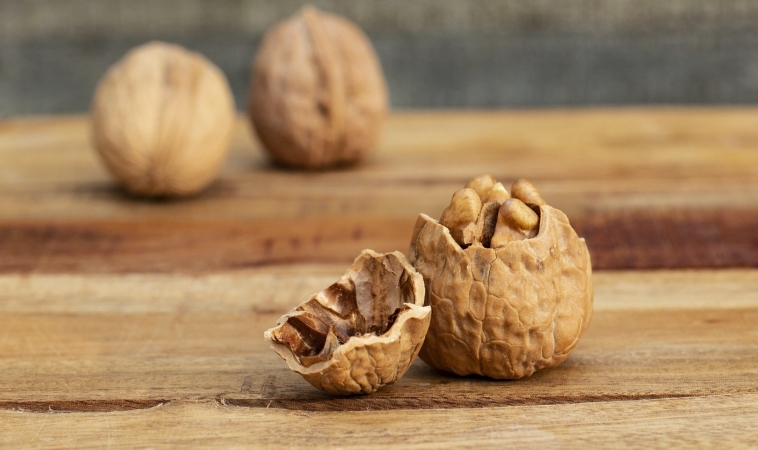 Walnuts may not just be a tasty snack, they may also promote good-for-your-gut bacteria. New research suggests that these “good” bacteria could be contributing to the heart-health benefits of walnuts.

In a randomized, controlled trial, researchers found that eating walnuts daily as part of a healthy diet was associated with increases in certain bacteria that can help promote health. Additionally, those changes in gut bacteria were associated with improvements in some risk factors for heart disease.

Kristina Petersen, assistant research professor at Penn State, said the study — recently published in the Journal of Nutrition — suggests walnuts may be a heart- and gut-healthy snack.

“Replacing your usual snack — especially if it’s an unhealthy snack — with walnuts is a small change you can make to improve your diet. Substantial evidence shows that small improvements in diet greatly benefit health. Eating two to three ounces of walnuts a day as part of a healthy diet could be a good way to improve gut health and reduce the risk of heart disease,” said Kristina Petersen, assistant research professor at Penn State.

Previous research has shown that walnuts, when combined with a diet low in saturated fats, may have heart-healthy benefits. For example, previous work demonstrated that eating whole walnuts daily lowers cholesterol levels and blood pressure.

According to the researchers, other research has found that changes to the bacteria in the gastrointestinal tract — also known as the gut microbiome — may help explain the cardiovascular benefits of walnuts.

“There’s a lot of work being done on gut health and how it affects overall health,” said Penny Kris-Etherton, distinguished professor of nutrition at Penn State. “So, in addition to looking at factors like lipids and lipoproteins, we wanted to look at gut health. We also wanted to see if changes in gut health with walnut consumption were related to improvements in risk factors for heart disease.”

For the study, the researchers recruited 42 participants with overweight or obesity who were between the ages of 30 and 65. Before the study began, participants were placed on an average American diet for two weeks.

After this “run-in” diet, the participants were randomly assigned to one of three study diets, all of which included less saturated fat than the run-in diet. The diets included one that incorporated whole walnuts, one that included the same amount of alpha-linolenic acid (ALA) and polyunsaturated fatty acids without walnuts, and one that partially substituted oleic acid (another fatty acid) for the same amount of ALA found in walnuts, without any walnuts.

In all three diets

In all three diets, walnuts or vegetable oils replaced saturated fat, and all participants followed each diet for six weeks with a break between diet periods.

To analyze the bacteria in the gastrointestinal tract, the researchers collected fecal samples 72 hours before the participants finished the run-in diet and each of the three study diet periods.

“The walnut diet enriched a number of gut bacteria that have been associated with health benefits in the past,” Petersen said. “One of those is Roseburia, which has been associated with protection of the gut lining. We also saw enrichment in Eubacteria eligens and Butyricicoccus.”

The researchers also found that after the walnut diet, there were significant associations between changes in gut bacteria and risk factors for heart disease. Eubacterium eligens was inversely associated with changes in several different measures of blood pressure, suggesting that greater numbers of Eubacterium eligens was associated with greater reductions in those risk factors.

Additionally, greater numbers of Lachnospiraceae were associated with greater reductions in blood pressure, total cholesterol, and non-HDL cholesterol. There were no significant correlations between enriched bacteria and heart-disease risk factors after the other two diets.

Regina Lamendella, associate professor of biology at Juniata College, said the findings are an example of how people can feed the gut microbiome in a positive way.

“Foods like whole walnuts provide a diverse array of substrates — like fatty acids, fiber and bioactive compounds — for our gut microbiomes to feed on,” Lamendella said. “In turn, this can help generate beneficial metabolites and other products for our bodies.”

Kris-Etherton added that future research can continue to investigate how walnuts affect the microbiome and other elements of health.

“The findings add to what we know about the health benefits of walnuts, this time moving toward their effects on gut health,” Kris-Etherton said. “The study gives us clues that nuts may change gut health, and now we’re interested in expanding that and looking into how it may affect blood sugar levels.”