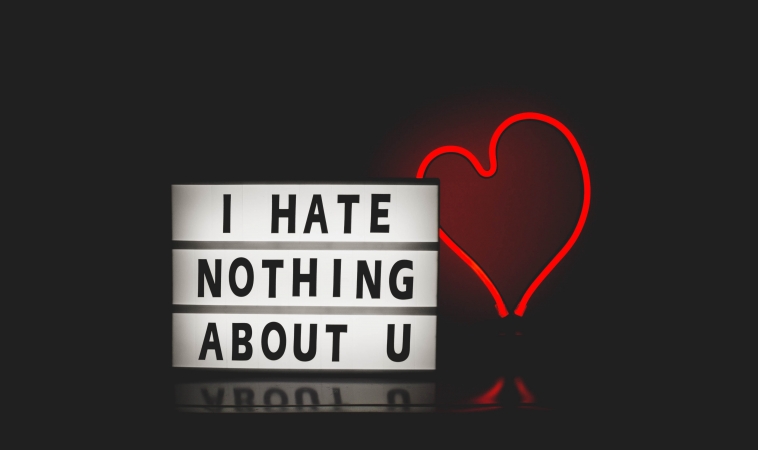 Hatred is blind, as well as love. ~ Oscar Wilde 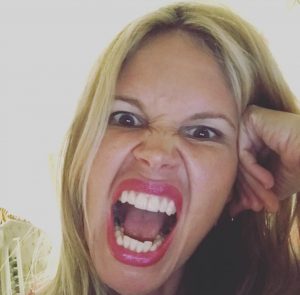 It is said that the opposite of love isn’t hate, but rather apathy. Love, being such an all encompassing emotion of deep passion, and apathy being a complete lack of interest or regard.

When I was a little girl,  the word h-a-t-e was a dirty word. Hate was one of the four letter words we couldn’t say because it was bad, it was mean, and we were taught that it was a “sin” to not only say it, but to act it or even feel it. We weren’t punished, but we were encouraged to say “ I don’t care for” or “I don’t like.”

I remember a time as a teenager when I stormed out of the room and said to my mother “I hate you!!!” I wish I had a great story to share along with it, but the truth is that the word was so strong in my mind, that all I can remember is the awful sinking feeling of heart and regret I felt when it was too late to stuff those words back into my mouth. You can’t unsay anything once it has been said.

The word “hate” has innocuously moved into my lexicon

Nowadays, the word hate has innocuously moved into my lexicon with regard to anything I dislike that is inanimate. You know, things like pumpkin spice anything. Or yoga (don’t judge). Putting gas in my car. But as a rule, I don’t use the word to refer to important things, or people. That’s just, well, what is it?

The polar opposite emotions that happen to be two of the strongest sentiments a person can experience. If you’re human, you’ve likely felt both. The strong, deep, passionate love that inspires songs, movies, poems, and plays. When this love bond is broken, however, these blissful feelings of love and affection can quickly morph into a hate so strong you might wonder how you ever felt a love so strong.

If you’ve ever been in love, you know that it’s absolutely, one-hundred percent possible to hate them, as well. Although these emotions are on complete opposite ends of the spectrum, the two happen to share a very complex relationship. Some scientists even  speculate  that the deeper one’s love is for another, the deeper their hate for that person can be.

The Intimate Relationship Between Love and Hate: Two Distinct Regions of the Brain Associated with Both Love and Hate

In 2008, scientists discovered there are two distinct regions of the brain associated with love and hate. The putamen and the insular cortex. Both are part of the brain’s sub-cortex…and both have been dubbed “hate circuits.”

The putamen is known to play a role in the perception of contempt and disgust. It is also believed to possibly be a part of the motor system that’s activated when a person has the desire to take action about something.

It’s speculated that this could be why love and hate sometimes lead to behavior that is strikingly similar. Are “acts of passion” somehow related to these distinct areas of the brain? Researchers believe, “the putamen could also be involved in the preparation of aggressive acts in a romantic context, as in situations when a rival presents a danger.”

Brain scans of people who are deeply in love  show  increased activity in the insula, sometimes referred to as the insular cortex. While research on the insula and the role it plays in human behavior didn’t even start until the 1990s, neuroscientists who now study this area of the brain, say it can lead to profound insight of what it’s like to be human.

Being human, as we all know, is associated with countless emotions we experience. We love. We’re happy. We hate. We’re angry. The insula is connected to several of the emotions we associate with love and hate. Lust. Pride. Embarrassment. Shame. Guilt. Empathy. Anger. Disgust. Loathing. It’s no wonder it lights up when someone is socially rejected and that damage to the insula is associated with increased apathy.

Aside from its association to emotions of love and hate, it’s associated with both anticipating and feeling pain. It interprets both hunger and craving, keeping the desire alive for both food and drugs. Loss of libido can also occur when the insula is impaired.

Love and Hate: A Look at Rejection, Vulnerability, and Jealousy in Romantic Relationships

There is a deeply complex relationship between love and hate. Especially when it comes to romantic relationships. In one study, when participants were presented with negative events from 3 different target people, they had the most hate for someone they had previously loved the most.

Love You Most…Hate You More?

Hate and love, it seems, are both involved in the neural processing of what’s sometimes called “the arousal effect of emotion,” which refers to the arousal of strong emotions and emotional behavior. An emotion with a high arousal effect can rapidly turn from positive to negative.

There’s a deep connection between what’s going on in our brain, and the love and hate we feel for another person. When it comes to romantic relationships, it seems that the more we love, the higher our capacity for hate.

If you’ve ever been betrayed and felt a deep hatred for someone you once loved, now you know this hatred is associated with some of the same areas of your brain as the love that once swept you off your feet. This could very well be the reason the hate you felt came on so strongly.

I still prefer to use the word “dislike!”

Please join me at Love is Medicine  on Facebook where we regularly discuss topics like this, and more, all the time. Understanding the intimate connection between our emotions, the body, and the brain can give us a deeper understanding of what it truly means to love and how we can use this love to transform our world.