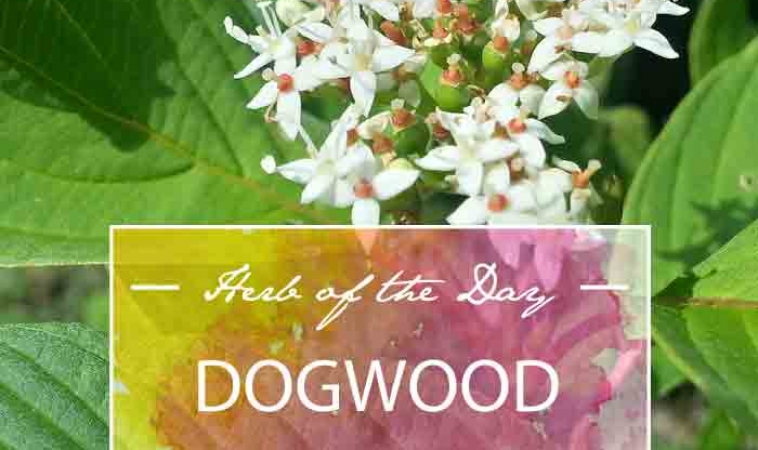 Dogwood (Cornus sanguinea) is growing all over my little mountain. When I first noticed it, I was driving down our road and saw black berries and red stems. Immediately, I thought that it was Elderberries and I just hit the motherload of places to collect them. But, upon further inspection, they are most definitely Dogwood, which is still useful of course, just not in the same way.

Technically you can eat the berry raw or cooked and it contains Vitamin C. The flowers and berries can be made into a brandy, marmalade or syrup. But, the berries might make you vomit, so you probably won’t want to eat too many. An oil can be extracted from the seeds which is also edible

Dogwood is named for its reported benefit of curing hydrophobia, which is a symptom of rabies, and a decoction for washing mangy dogs. Generally, all parts of the plant are astringent, since all parts contain tannins. The berries are mostly considered an emetic, however, one source said that a tea was made from 9 berries to treat diarrhea. I would suspect that it is the tannins in the berries improving the gastrointestinal mucosa so that loose, watery stools are improved.

A tincture can be made from the bark or leaves and taken internally to treat eczema, skin infections, intestinal parasites, ringworm, colic, and gout. It can also be used acutely to decrease a fever and alleviate chills. The leaves could also be used externally as a poultice to help dry wounds in a pinch, but they can cause some skin irritation in sensitive people. A tea can be made from the bark to make into a fomentation for hemorrhoids. The bark has more of the febrifuge qualities of the plant, so pick the part you want to use accordingly.