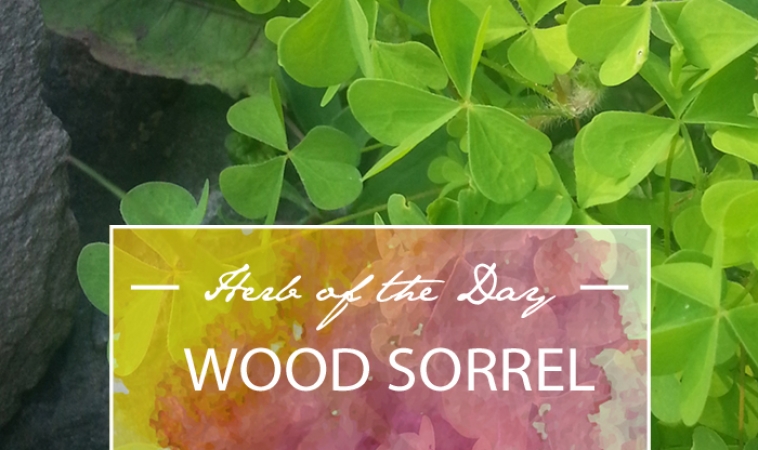 If I asked anyone who isn’t an herbalist or botanist to draw a clover, they would draw the plant in the center of this picture. But it isn’t a clover at all. It’s Wood Sorrel (Oxalis sticta), which isn’t even in the same family as clover. Oxalis is in the Oxalidaceae family, while clover is in the Fabaceae (legume, pea, bean) family.

If you remember back a few days, Red Clover is Trifolium pratense. It has a long oblong leaf with a white-ish “V”. The other common clover is Trifolium repens, the White Clover, which has rounder leaves with a crescent or “U” shaped white area. If you look to the bottom right of the picture, there are Red Clover leaves next to the wood sorrel.

Wood Sorrel is an edible plant with a wonderful lemon-like taste. On one of our walks, I joked to my husband that he could make a whole dessert of Red Clover Flowers, Wood Sorrel Leaves and Red Raspberries. Thankfully my husband appreciates my herbal ways and doesn’t hesitate when I shove a new plant into his face and say “Eat this!”

While on an herb walk in Transylvania County, North Carolina, another herbalist shared that this plant, with it’s 3 heart shaped leaves of 6 lobes, represents the 6 directions to the Native Americans: North, South, East, West, Heaven and Earth.

The wonderful lemony taste I described above is due to the oxalic acid content of the leaves, otherwise known as oxalates. Too much of these leaves could cause some kidney stones, but a moderate amount is a great diuretic, can be used in febrile diseases, chronic catarrh (mucus), urinary afflictions, and even scurvy. Externally, the mashed leaves can be applied to infected, malignant and non-healing ulcers.