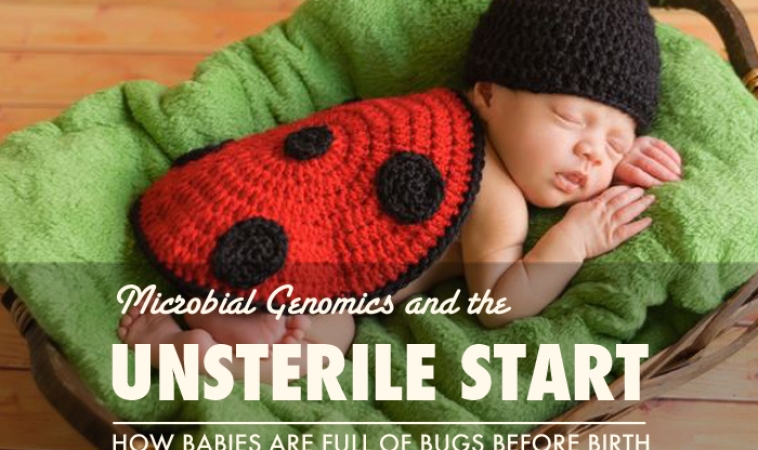 How Babies Are Full of Bugs Before Birth and Effect Mom’s Microbiome in the Reproductive Tract, Predicting Birth Outcomes

When the National Institute of Health undertook the Human Microbiome Projectas one research initiative to study our gut microbes, no one imagined at the time just how extensive a role microbial genomics and metagenomics had on human health. With our microbiome’s collective genes of 10,000+ species outnumbering our human genes 150- to-1, many scientists and clinicians are beginning to wonder who inhabits who?1-3

Not only are researchers and fellow doctor geeks, such as yours truly, captivated and immersed in microbiome studies and these research results, but public interest and fascination is also evident. For example, the American Gut provides an opportunity for anyone to sample and discover what inhabits their insides. Furthermore, by participating, each individual becomes involved with microbiome research and has the ability to compare their critters of microbes to the guts of thousands of other people in the US and around the world. 2

With this explosion of study results, scientific reviews, and emerging research, connections have been verified between the microbiome and a vast amount of health effects. I discussed many of them in a previous post4 and they include manufacturing of various vitamins, tumor growth and pathogen inhibition; modulation of cardiovascular and fatty liver disease risk; mood and behavior influences; detoxification support, drug metabolism,5 digestive health, estrogen metabolism and weight; blood sugar and risk for diabetes; skin health; food sensitization and allergies; autism risk, autoimmunity, and other disease processes.4-6

Up until recently, many physicians and scientific literature believed that a fetus was sterile until it was colonized with bacteria through the vaginal birth canal. Recently, however, this theory has been challenged.6- In 2011, Clinics in Perinatology summarized the latest findings:

Most current literature suggests that the gastrointestinal tract of a normal fetus is sterile. During birth and rapidly thereafter, bacteria from the mother and the surrounding environment colonize the infant’s gut. It is obvious that exposure at birth would differ by mode of delivery. What long term sequelae or impact this difference in exposure may have on the child has yet to be determined.

Some recent research work suggests colonization may begin even earlier. While the paradigm has been that babies’ intestines are sterile until birth, recent work found a microbial community already dwelling in the meconium of some babies born prematurely.18It has also been shown that amniotic fluid of mothers with preterm labor contains a large and diverse spectrum of bacterial rDNA. 20 While a baby is in utero, it typically swallows 400 to 500 milliliters of amniotic fluid per day at term, and the hypothesis that intra-amniotic infection is the driving force behind preterm labor is one being widely studied in obstetrics.19 Whether the microbes or microbial components swallowed in the amniotic fluid stimulate an inflammatory response driving preterm birth remains to be evaluated. The effect these organisms have on the developing immune system, aside from their role in preterm labor, also raises interesting questions.6

In a 2014, a pivotal hypothesis article entitled, “A holobiont birth narrative: the epigenetic transmission of the human microbiome,” published in Frontiers in Genetics,author Scott Gilbert sought out to “expand, explore, and re-tell the human birth narrative.” The article abstract summarizes the findings, including support for the non-sterile fetus. The abstract reads as follows (parenthesis mine for added clarification):

Another article published in the same year reinforced some of these findings. It was entitled, “Bacteria in Healthy Placentas” and reported, “Contrary to the prevailing idea of a “sterile” intrauterine environment…the placental microbiome was most similar to that of the oral cavity, but the clinical implications of this finding remain to be explored. In addition, the authors identified associations between the composition of the placental microbiome and a history of remote antenatal infection, as well as preterm birth, raising the possibility that the placental microbiome may play a role in these events.” 9

Recently, an article inPNAS linked premature birth to changes in the microbiome of the reproductive tract. 10-11 (See article summary and commentary here.) Various other studies have reported that the “fetal intestinal microbiome derived from swallowed amniotic fluid may be involved in the inflammatory response that leads to premature birth,” 12 linking the microbiome to unbalanced systemic immune responses, which would include infectious bacteria. Furthermore, interactions between the environment of mom and her microbiome were shown to impact baby’s.

Another study discussed the implications of preterm birth (PTB) and the
placental microbial biomass as follows, “We discuss the implications of the placenta housing a microbial biomass for PTB and the effect of maternal microbiomes at various niches for fetal colonization and health outcomes. We suggest that the placenta is an integral part of the pipeline for microbe-powered driver of fetal destiny.”13

Our microbiome is influenced by what we eat, our lifestyle, and as noted above, by transfer of microbes from our mothers.14 As a woman goes through various trimesters, her immune system, and her microbiome are altered to prepare for pregnancy. For example, a 2012 study in Cell reported, “The first trimester gut microbiota are similar to one another and comparable to those of normal healthy controls, but shift substantially in phylogenetic composition and structure over the course of pregnancy. By the third trimester, the between-subject diversity has greatly expanded, even though within-subject diversity is reduced, and an enrichment of Proteobacteria and Actinobacteria is observed a majority of T3 samples. Furthermore, the abundances of health-related bacteria is impacted.” 15

As indicated in the most recent article on the “vagiome”, the major disturbances and changes could only be found in the vagina microbiome. This contradicts with some of the studies discussed above, but is in alignment with the fact that this could indicate that the stability of the microbiome composition within the placental transfer is important for fetal development. Whereas, changes in mom’s health may not affect the microbiome status in other niches, the changes in the “vagiome”, by elevated Gardnerella or Ureaplasma abundances, could display that the optimal timing for the next transfer of mom-to-baby through the birth canal is incomplete. This could provide a clue to potential interventions that moms-to-be may need. Furthermore, as we learn more about the impact of the placental-microbe transfer, we may be able to prevent such inflammatory response changes in the vaginal tract by supporting mom’s microbial transfer to her baby through such interventions as diet, lifestyle, and probiotics.6, 10-11

In a prospective, longitudinal study of 6 infants, the authors concluded, “In very low birth weight infants, the authors found that meconium is not sterile and is less diverse from birth in infants who will develop late-onset sepsis. Empiric, prolonged antibiotics profoundly decrease microbial diversity and promote a microbiota that is associated not only with neonatal sepsis, but the predominant pathogen previously identified in the microbiome. Our data suggest that there may be a ‘healthy microbiome’ present in extremely premature neonates that may ameliorate risk of sepsis. More research is needed to determine whether altered antibiotics, probiotics or other novel therapies can re-establish a healthy microbiome in neonates.”16

What can moms do now? Protect their precious microbiomes by diet, lifestyle, exercise, and avoiding unnecessary antibiotics.

Sarah Lobisco, ND, is a graduate of the University of Bridgeport’s College of Naturopathic Medicine (UBCNM). She is licensed in Vermont as a naturopathic doctor and holds a Bachelor of Psychology from State University of New York at Geneseo. Dr. LoBisco is a speaker on integrative health, has several publications, and is a certification candidate in functional medicine. Currently, she is the Director of Clinical Education for an esteemed nutraceutical company.