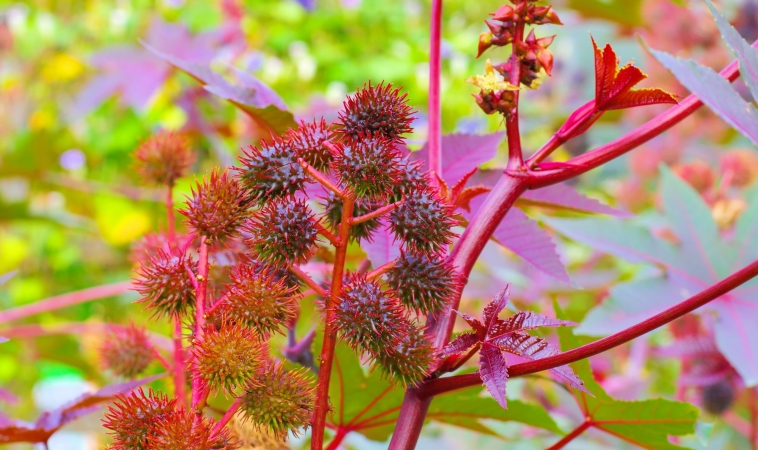 As the saying goes, history repeats itself.  Especially if we don’t listen to the teachings of our elders and forefathers, the sages and wise women before us.  Those who have done the time, and have left us countless treasures that we need not search far and wide for.  In fact, they are often right under our noses.  These treasures teach us how to live better and avoid faux pas in our lives.

One such obvious treasure for our health is castor oil 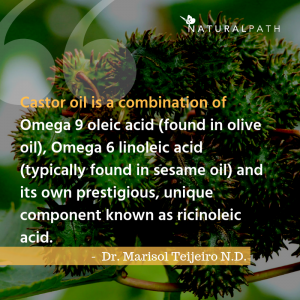 If you have been learning about natural health for some time, you have likely run into this infamous oil.  Perhaps you have seen it on the bottom shelf of every health food store you’ve ever gone into.  It’s legendary across the centuries and through different cultures.  It has more than proven its weight in gold and deserves to wear a crown as the Queen of Oils, being an ultimately healing and cosmetically beautifying tool that is natural, do-it-yourself and easy on the pocket book.

Castor Oil’s Reign Throughout the Ages

What is the history of this incredible oil throughout the ages?

The first usage of this oil was reported in 4000 BC in Egyptian tombs discovered by archaeological explorers.  This gives castor oil one of the longest reported usage by humans for more than 6000 years.  Egyptians used it in embalming practices[1] as well as in oil lit lamps.[2]  In the Ebers Papyrus, an Ancient Egyptian medical treatise, its use as a laxative[3] was discussed. 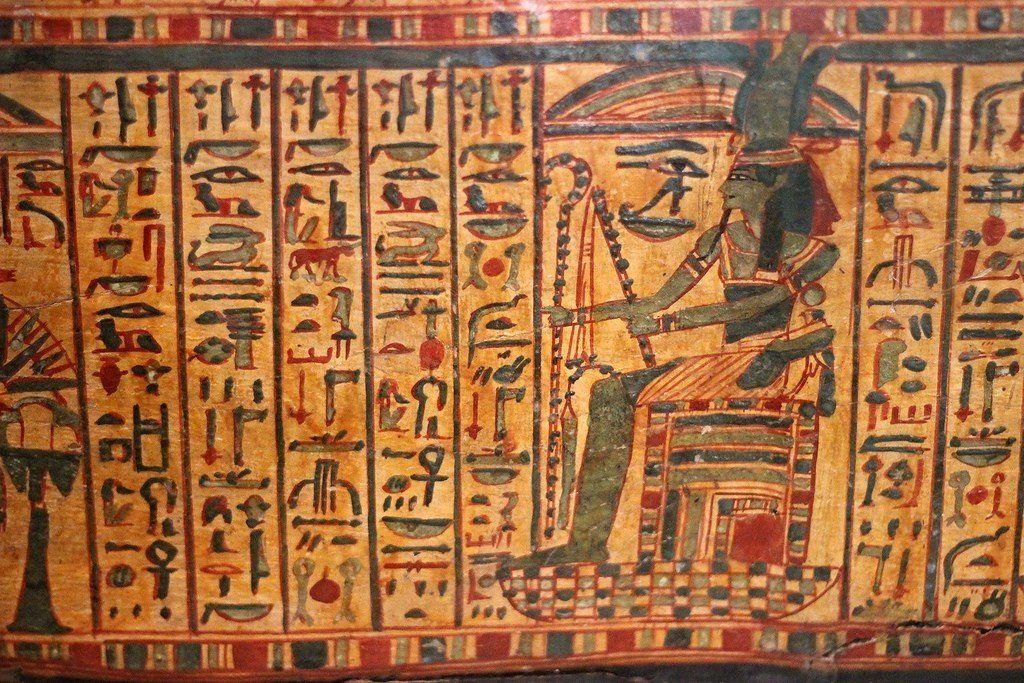 The Spiritual Connection to Castor Oil

The name Palma Christi is a well known derivative used for the oil because it was said to be used by Christ in the bible to anoint the sick.  It has also been given this name because the leaves of the castor bean plant from which the oil is extracted (ideally cold-pressed), resemble a healing hand, the ultimate healing hand of Christ, so the story goes.

Not only was this oil described to be used by Christ, but it was said to be the anointing oil for kings and queens as they took their thrones, and priests and priestesses as they elevated in the clergy and got closer to God.  Castor oil was said to have unifying abilities with spirit, possibly connecting us with God.[4] 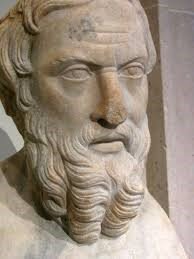 Countless other well renowned heroes and heroines of the ages used the oil.  Cleopatra was said to have used castor oil as her chosen beauty oil in order to whiten her eyes.  Greek and Roman Goddesses used the oil to beautify their hair, skin & nails.

Medicine men such as Greek Herodotus[5] and Roman Pliny the Elder[6] used this oil for many health problems because of its many medicinal purposes, but also quite notably to whiten the skin and increase hair growth.  So many uses of such a simple oil.

A really incredible aspect of this serendipitous oil is its chemical structure.  It is a combination of the Omega 9 oleic acid (found in olive oil), the Omega 6 linoleic acid (typically found in sesame oil) and its own prestigious, unique component known as ricinoleic acid.  The action of ricinoleic acid is similar to what you get when your body metabolizes the ever famous and health-promoting fish oil; anti-inflammatory prostaglandins.[7]  This makes it beneficial for many different purposes.  It’s like the all purpose oil for health and beauty, and the go-to in your home medicine cabinet.

In the East, Traditional Chinese Medicine scriptures report using the oil topically with a compress for inflamed joints, which makes total sense because of its anti-inflammatory properties.  This seems to be the first account of castor oil being used as a compress.

East Indian cultures and Ayurvedic Medicine used castor oil as a laxative and for digestive disturbances.[8]

Caribbean and East and West Indian Cultures used castor oil as a weekly purgative to help with cleansing of the intestine, prevention of parasites, and, in certain cases, as a punishment for bad behavior.  This was best illustrated in the Tom and Jerry Cartoon called “Baby Puss” produced by MGM and launched in 1943.  In the short film, Tom the cat pretends to be a baby, and because of bad behavior, Jerry attempts to feed him castor oil, much to the disgust of Tom. 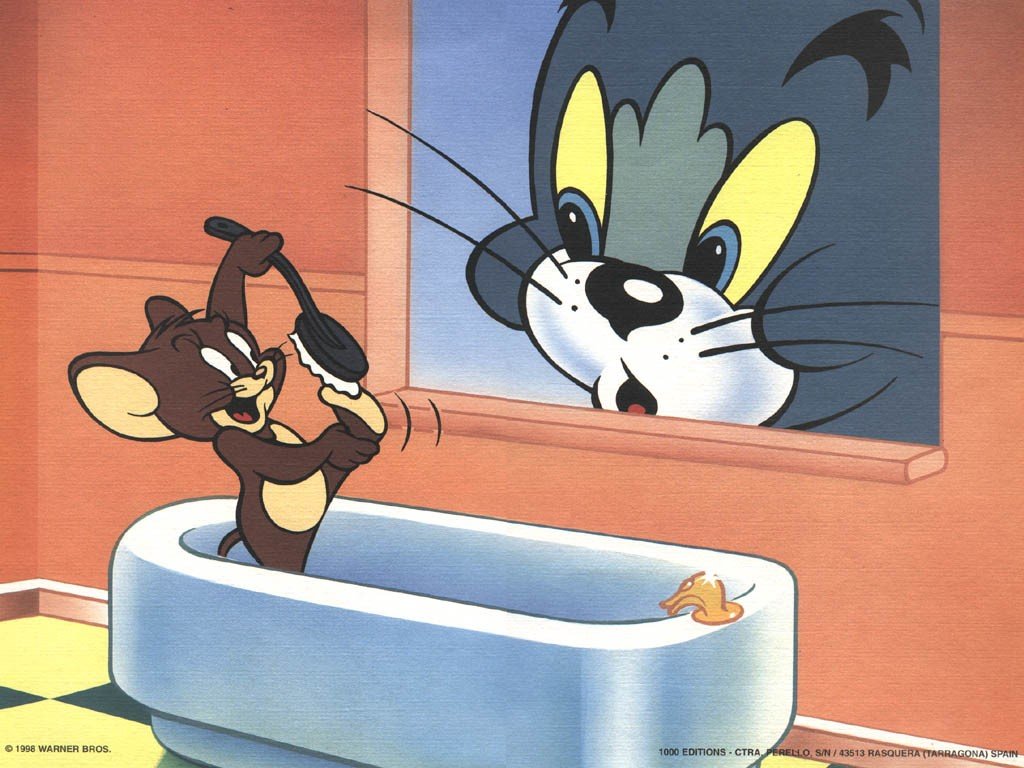 Multiple other uses are seen in ethnobotanical cultures throughout the world, including feeding castor oil to babies to facilitate their first poop.[9]

The ‘Dark Ages’ of Castor Oil

As with all great things, there can be a down side.  For castor oil it is no different, and the dark ages of its usage in history demonstrates this.  In the 19th century, during a time known in Mexico as the ‘Empacho’, castor oil was abused after periods of overindulgence in food and drink as a mechanism to purge the body.[10]

Moving into the 20th century, the other well known example of its misuse was in Italy, during fascist regime, where Italian soldiers would use castor oil as a torture tool to induce laxation, and in certain cases electrolyte depletion resulted in death for prisoners.[11] 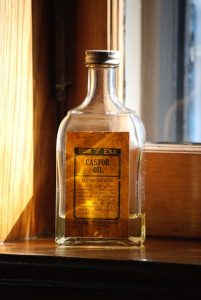 In the early 20th century in North America, apothecaries and pharmacies carried castor oil next to other herbal concoctions, mainly the well known ipecac, senna and witch hazel.

The illustrious North American bedside healer known as Edgar Cayce is credited with popularizing the practice of castor oil packs.  He would read the King James version of the bible every day of his life and was known for intuiting treatments for his clients.  Every treatment protocol, no matter what the condition, included the legendary castor oil pack.[12]

Fast forward years later and it was adopted into the practice of naturopathic doctors and functional medicine practitioners worldwide.

In the conventional medical system, you can see castor oil being used by midwives and doulas, as a means of inducing labor.[13]

Resurgence of Castor Oil for Beauty 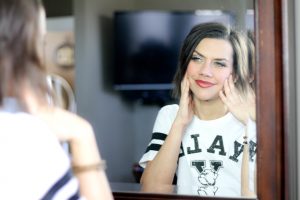 Recently, a historical trend which had its roots in the Mediterranean and Caribbean, has seen resurgence.  The cosmetic use and application of the oil has regained its popularity for helping hair, eyebrows and eyelashes to grow.  This is now commonly practiced in many places around the world.

In addition, it has owned its throne as the best carrier oil for essential oils, which have become a worldwide phenomena.  As castor oil is the only oil that can penetrate into the dermis (the second layer of skin) it can bring essential oils and other nourishing skin oils deeper into the body.

Castor Oil in Plastic vs. Glass 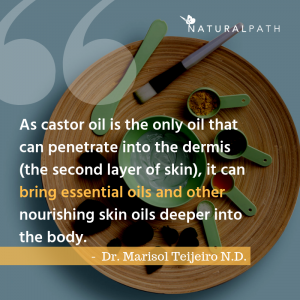 It’s important to note that because of this powerful carrying ability, it’s absolutely essential to always buy organic castor oil, and always in a glass bottle.

One of the faux pas that I see many patients and consumers make is to purchase low grade oil in a plastic bottle.  The oil must be cold-pressed and extra virgin to have the highest level of nourishment.  Otherwise it can work against us, bringing chemical components from plastic manufacturing, chemicals from production such as hexane, or pesticides from its cultivation deep into the body.  Because of my study and experimentation with this incredible oil I have always recommended to patients that if they do not have castor oil that is certified organic and bottled in glass, they should immediately dispose of it.

If It’s Not Broken, Don’t Fix It

Castor oil has become one of my clinical passions, and it is my mission to spread the word about this gem of an oil for all to use.  The promise of this oil is that it has been with us forever and it will continue to journey with us in our pursuit of feeling good and looking beautiful.  It is an incredible feat to have evolved with us over the past 6000 years.  My feeling is this, if it’s not broken, don’t fix it!  Make it part of your daily routine to help you feel good & look good, too!

Read Part 1 of this series here.

Read Part 3 of this series here.

Disclaimer: Any opinions, advice, statements, services, offers, information or content expressed or made available by third parties, including information providers, are those of the respective authors or distributors. Neither Queen of the Thrones™nor any third-party provider of information guarantees the accuracy, completeness, or usefulness of any content. Still, we only promote content and products that we truly believe in and share with our friends, family and patients. If you ever have a concern with anything we share, please let us know. We want to make sure we are always serving you at the highest level. This communication does not create a doctor-patient relationship. Information provided does not replace the advice of your health care practitioner. Always seek the advice of your healthcare practitioner before starting new lifestyle practices. 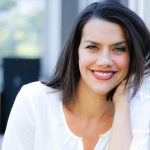 Dr. Marisol Teijeiro N.D., is the director of Sanas Health Practice in Petersburg, Ontario. Her focus is on cleansing and gut health, and she’s appropriately been dubbed the Queen of the Thrones™ by her patients as she’s helped thousands overcome digestive issues and take control of their toilet troubles. She has spearheaded the Queen of the Thrones™ line of lifestyle entertainment products that includes an easy, mess-less castor oil pack and castor oil in a glass bottle. Dr. Marisol speaks internationally at educational conferences for practitioners, teaches a course on castor oil at the Canadian College of Naturopathic Medicine and will be releasing her debut guide book on digestive health, Oh Sh*t, later this year. Her passion lies in teaching people how to digest, absorb, and eliminate well, so that they can live well and achieve their dreams