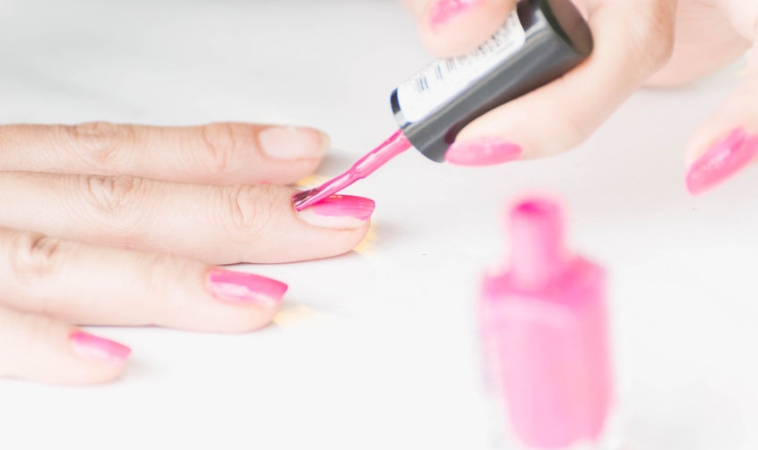 WASHINGTON – Researchers at Duke University and Environmental Working Group have found evidence of a suspected endocrine-disrupting chemical widely used in popular nail polishes in the bodies of more than two-dozen women who participated in a biomonitoring study.

The study, published today in Environment International, found that all women had a metabolite of triphenyl phosphate, or TPHP, in their bodies just 10 to 14 hours after painting their nails. Their levels of diphenyl phosphate or DPHP, which forms when the body metabolizes TPHP, had increased by nearly sevenfold.

“It is very troubling that nail polish being marketed to women and teenage girls contains a suspected endocrine disruptor,” said Johanna Congleton, Ph.D., MSPH, a senior scientist at EWG and co-author of the Duke-EWG study. “It is even more troubling to learn that their bodies absorb this chemical relatively quickly after they apply a coat of polish.”

Click here for an analysis of the Duke-EWG study, entitled, Nailed: Endocrine Disruptor In Nail Polishes Gets Into Women’s Bodies.

According to EWG’s Skin Deep® cosmetics database, more than 1,500 nail products including polishes made by Sally Hansen, OPI and Wet N Wild, contain TPHP. Click here for a list of brands that list TPHP as an ingredient.

More nail polishes may contain undisclosed TPHP.  The Duke-EWG study tested 10 polishes for TPHP and found the chemical in eight of them. Two of the eight with TPHP did not list the ingredient on their labels.

A number of laboratory studies have found that exposure to TPHP caused endocrine disruption. In animal studies, it has caused reproductive and developmental problems. Recent scientific research suggests that TPHP may contribute to weight gain and obesity.

The chemical probably functions as a plasticizer in nail polish, rendering it more flexible and durable.  For years, it has been is used in plastics manufacturing and as a fire retardant in foam furniture.

“It is possible that TPHP is now being used in nail polish as a replacement for phthalates, which also have endocrine-disrupting properties and are toxic to the reproductive system,” said Heather Stapleton, Ph.D., associate professor at Duke University and principal investigator of the Duke-EWG study. “However, it’s not clear that TPHP is the better alternative. There is growing evidence suggesting that TPHP may affect hormone regulation, metabolism, reproduction and development.”

The new study raises the prospect that millions of American teens, tweens and even younger girls are being exposed to a suspected hormone-disrupting chemical at a time when their bodies are rapidly developing and entering puberty.  Nails Magazine, a nail salon industry trade publication, reported in August, 2014, that according to market surveys an overwhelming 97 percent of American girls ages 12 to 14 used nail products, including polish, and 14 percent of all teens and tweens used them daily.

Entrepreneur and eco expert Erin Schrode has dedicated her time to educating teens about healthier, safer lifestyle choices since co-founding the non-profit, Turning Green, in 2005. After learning about the dangers of toxic ingredients in cosmetics and personal care products, she launched her organization and went on to participate in a 2008 EWG study that found a host of endocrine disrupting chemicals used in everyday items in her body.

“It is alarming to think my ruby red nail polish could come with a side of toxic ingredients that could ultimately end up in my body,” said Schrode. “We cannot control far too many exposures to harmful chemicals in our world today, but each of us can become informed and spread the word, support legislation that protects our health, and make smarter choices whenever possible. By voting with our dollars we can shift the marketplace towards safer, healthier products…beginning with my own bottle of bright, glossy nail polish.”

To avoid exposing yourself and your children to TPHP in nail polish, you can find a list of brands that use TPHP in EWG’s Skin Deep®.