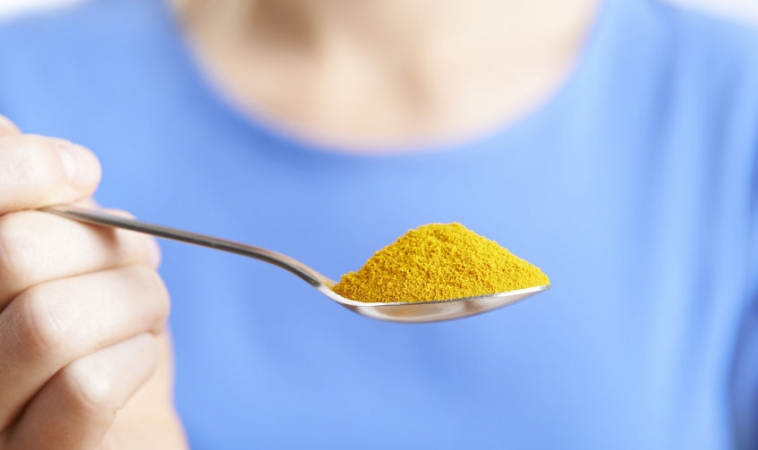 Turmeric, the Indian spice which serves as the main ingredient in curry, is a powerhouse of an herb, and one which is certainly worth including in your daily spice palate. The yellow/orange herb is a beautiful blend of earth and fire in taste, and and is wonderful mixed with peppers, cumin, coriander, and oregano. It also pairs extremely well with cinnamon, but it’s more than its versatility as a culinary ingredient that makes this herb so wonderful.

Turmeric has been shown to be fairly effective at lowering cholesterol, and is generally championed as a great preventative spice for cardiovascular issues. It also helps lower triglycerides and may help balance blood sugar, meaning it’s a great spice for diabetics. Perhaps its most notable effects is in its ability to lower inflammation, which makes it very useful in helping people who have inflammatory sources of pain, such as arthritis or sprain/strain injuries. Turmeric, or its main constituent, curcumin, is often put in herbal supplements for pain.

Because it’s known to help lower inflammation, it’s likely that turmeric helps with a great number of metabolic diseases which have foundations in increased inflammatory states. Its also a great herb to include in workout powders and protein supplement shakes.

When cooking with turmeric, try and use black pepper as well, since the constituents in pepper help make the turmeric more bioavailable to the body. Here is a wonderful recipe that has been circulating around the internet, and is absolutely delicious: 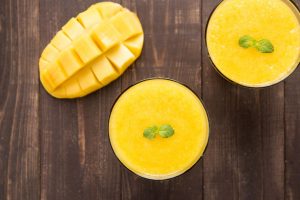 For more of a smoothie texture, use frozen mango and frozen bananas.

And here is a more savory recipe for a curried carrot soup, which I absolutely love: 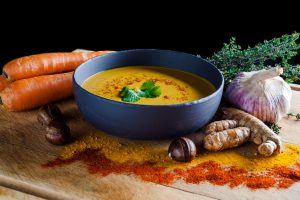 a pinch of cayenne pepper

Bake carrots, sweet potatoes, and ¾ of the onion at 400 degrees with olive oil and salt and pepper. All of these will take about 25 minutes. Bake the garlic as well, but take this off in 10 minutes so it does not burn.

Dice up the remainder of the onion and set aside.

Meanwhile, in a large pot, heat a bit of oil over low heat, saute the remainder of the onion until translucent (with salt) . Add the turmeric, garam masala, and ginger and heat just until fragrant (30 seconds). Add the water and stock, and bring to a gentle boil, cover, and reduce to a low simmer.

Add the roasted garlic and all of the roasted veggies to the pot. Allow to cool slightly and then puree in blender.