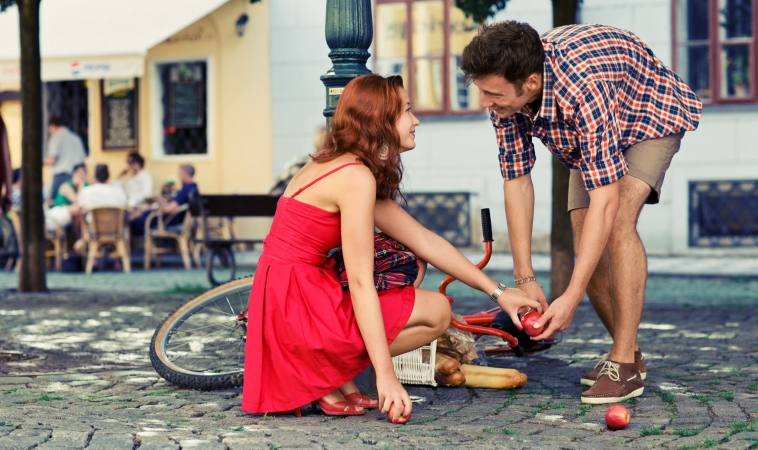 I’d been hit!And then everything went silent; Love at first sight

It’s 1988 and just past lunchtime on campus of my suburban high school. My jeans probably had zippers on the ankles and my bangs were probably curled under and fluffed. I was probably wearing puffy sleeves. The final bell began to ring and I was darting into the 100 building to avoid a tardy in Mr Hull’s algebra class. Mr Hull was exasperated by me because although I possessed a strong analytical mind, I let math frighten me. He would say that If I exerted the same energy on solving the problems that I did in arguing against the methods to get there, that I could teach the class instead of being terrified by it.

Maybe I skipped this class sometimes. As class president, I sometimes got away with it.

The last bell chimed and I swung open the door right into Mr Hull’s pensive gaze. I swiveled around him toward my seat hoping to avert his comments when POW!

And then everything went silent.

Yes, we were very young, but love is love, and we were inseparable those 4 years.

The next time it happened was a decade later.  I had been ill. The last thing I was looking for was love. But he quietly walked past me and instantaneously I knew him, I loved him.

We didn’t date until several months later, but I went home and told my father I had seen the man I would marry.

And marry we did. That cupid’s arrow gave us 5 miscarriages, 2 daughters and 14 years together.

Do you believe in love at first sight?

In 2010, researchers from Syracuse University published a study called “The Neuroimaging of Love.” It quickly gained global attention.

The meta-analysis took a deep look into the brain by examining a wide range of studies which delve into the brain’s networks associated with various aspects of love. From encompassing passionate love relationships to others like maternal love and unconditional love for disabled individuals.

Love at First Sight: A Chemical Cocktail Released in the Brain During the Initial Stages of Attraction

Research has found 12 different areas of the brain work together and release a cocktail of euphoria-producing chemicals including oxytocin, dopamine, adrenaline, and vasopressin when a person is initially attracted to someone.

The release of this chemical cocktail in the brain can literally happen in less than a second. Try just one-fifth of a second, making the romantic notion of “love at first sight” one that just might have some scientific reasoning behind it.

In 2017, researchers in the Netherlands set out to find out more about love at first sight. Almost 400 people (both men and women) completed surveys about possible romantic partners after their first meeting with that person.

Parts of the survey included:

Not only did they find that love at first sight is more commonly associated with attractive individuals, but also that it’s typically a one-sided thing.

One of the most compelling parts of the investigation suggested that love at first sight isn’t really love at all, but instead a strong initial attraction that makes a person feel as if they’re open to the possibility of a relationship with the object of their affection. 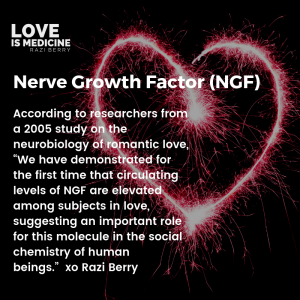 Aside from a release of feel-good chemicals like oxytocin and dopamine that are released when falling in love, researchers also found that there was also a significant increase in blood levels of nerve growth factor (NGF). Studies have shown that healthy levels of NGF have the potential to improve depression, repair the heart, possibly even preventing heart disease, support fertility, and more.

Researchers found the levels of NGF to be significantly higher in people who had just fallen in love, but there’s a catch. It doesn’t last for long.

According to researchers from a 2005 study on the neurobiology of romantic love, “We have demonstrated for the first time that circulating levels of NGF are elevated among subjects in love, suggesting an important role for this molecule in the social chemistry of human beings.”

While researchers of the study were unclear of the exact role NGF plays when falling in love, they speculated that the psychological or behavioral qualities of falling in love could have to do with the high amount of chemicals released in the brain.

“The raised NGF levels when falling in love could be related to specific emotions typically associated with intense, early-stage romantic love, such as emotional dependency and euphoria,” researchers of the study reported.

Does Love at First Sight Really Exist? Or Is it All About What’s Happening in the Brain?

Research contends that the role NGF plays in falling in love “confirms love has scientific basis.” If love at first sight truly exists,  it’s left up to those who have experienced it to decide.

While many claim they have experienced this coveted phenomenon, it may not be “love” they’re experiencing at all but rather a rush of chemicals that can make them feel as if the said person they laid eyes on really is someone they’ve instantaneously fallen in love with.

Remember, these chemicals are released in abundance in less than a second on those occasions of love at first sight, making it easy to associate what they’re feeling with falling in love. To fall in love instantly is one thing. To sustain this love over time is quite another. Some research suggests that love at first sight isn’t love at all, but rather a strong initial attraction.

In fact, there are actually different stages of love that show different areas of the brain at work in each stage. The chemicals released when a person first falls in love are far different from the chemicals associated with people in long-term relationships.

There is, however, basis for the idea of love at first sight, and researchers believe that what they’ve discovered can serve for further research in the areas of neuroscience and mental health. We all know that when relationships don’t work out, it can feel devastating and lead to the  “love-sickness” almost everyone has felt after a particularly difficult breakup.

“It’s another probe into the brain and into the mind of the patient. By understanding why they fall in love and why they are so heartbroken, they can use new therapies,” say experts.

Another concept of the phenomenon of love at first sight could be our magnetic sense. Magnetoreception is the ability to perceive magnetic fields, and something many experts believe could be our primal “sixth sense.” When experiencing love at first sight, are we energetically detecting a mate through the chemosignaling that takes place when detecting a person’s own energetic biofield and the energy contained within their heart?

According to experts from the HeartMath Institute, “The heart generates the largest electromagnetic field in the body. The electrical field as measured in an electrocardiogram (ECG) is about 60 times greater in amplitude than the brain waves recorded in an electroencephalogram (EEG).”

Emotional information is encoded into these electromagnetic fields, and through chemosensing (a molecular recognition that can detect signals or changes) we could be “sensing” that a person’s individual energy resonates with our own.

Pheremones also play a large role in initial attraction of a potential mate. These scent markers that are contained in human perspiration are widely known to rule sexual attraction and behavior. Is love at first sight simply a combination of these various chemical and electrical pulses that are produced physiologically? Or is it really love?

By examining these different physiological facets and their role in falling in love, it’s easier to determine if these feelings are truly love or just a psychophysiological process that occurs when meeting someone we’re attracted to.

Think about the first time you held your child. You loved them instantly and for a lifetime. Many physicists argue that time is an illusion. At least when it comes to love, I tend to agree. Do you?

To learn more about the physiology of falling in love and more topics like it, please join me on Facebook at Love is Medicine, where we take a deeper look at the science of love (and more) and how a better understanding can help us create vibrant physical and emotional health each and every day.