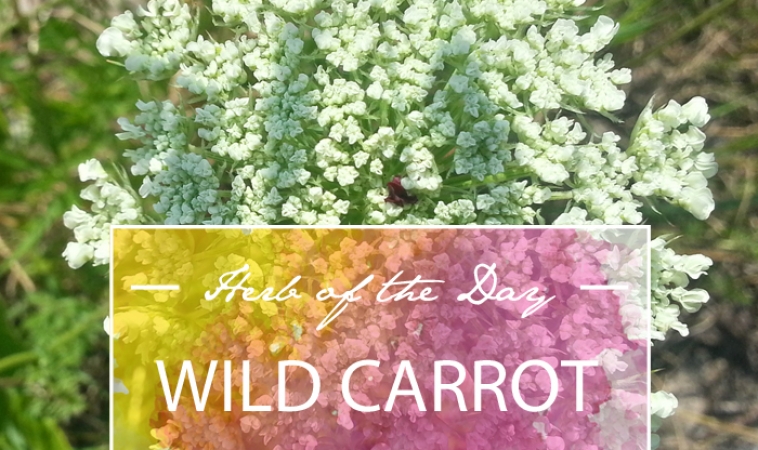 Wild carrot (Daucus carota) is a member of the dreaded Apiaceae family, and its closest looking relative is the deadly Poison Hemlock which killed Socrates (insert diabolical laugh here). Thankfully, there are a few different ways to distinguish between the two plants that I found at the Carrot Museum website.

First, if you crush the leaves and smell them, the Wild Carrot smells like carrot and the Poison Hemlock smells not so pleasant. Second, the stem of the Carrot is solid and hairy, whereas the Poison Hemlock is hollow and smooth. Third, Poison Hemlock can grow up to eight feet tall and starts flowering early in the spring, but Wild Carrot generally doesn’t grow much taller than three feet, blooms later and has a distinctive dark flower in the center of the inflorescence.

Still, if you are not positive, err on the side of caution and leave it be. Any ailment that can be cured by Wild Carrot is surely preferable to death.

As the name implies, Wild Carrot, also known as Queen Anne’s Lace or Birdsnest, is a direct relation and precursor to the cultivated carrot that we buy in supermarkets. However, the root of this flower is harder and thinner than the root we typically slice for our mirepoix. But that’s okay, the whole aerial part is just as edible and medicinal as the root. I’ve even seen recipes for the edible flower head to be battered and fried, or turned into a jelly.

The actions of Wild Carrot include antiseptic, aperient, apertif, aphrodisiac, carminative, deobstruent, diuretic, emmenogogue, galactogogue, nervine, ophthalmic, stomachic, and vermifuge. The seeds are also considered an abortifacient, but I wanted to make sure to separate that out from the other actions so that there is no confusion about the abilities on the rest of the plant.

An infusion of the whole plant is beneficial for aiding edema, kidney stones, cystitis, gout or any other complaints of the entire urinary tract. Wild Carrot is also beneficial at aiding the gastrointestinal tract by decreasing gas, diarrhea and killing GI worms. The seeds have the strongest action for bringing on a stubborn period and is even taken by some as a morning after contraceptive. The seeds should not be used by pregnant women because of the emmenogogic actions that can produce uterine contractions and initiate abortion. Eating cultivated carrots in your diet in normal quantities is completely safe and should not be associated with this action.

One of my favorite home remedies utilizes the conventional store-bought carrot as an aid for sore throats, but I’m sure the wild root could be used as well. The carrot should be grated into the center third of a piece of cloth such as a handkerchief or cheesecloth. Fold the cloth on either side over the carrot and apply the single thickness side to the neck. Cover with plastic wrap and use a scarf to tie it comfortably in place. Hot or cold applications of a carrot poultice can be used and are determined by the preference of the sick individual. If a cold application is desired, you can mix ice chips in with the shredded carrot, or apply an ice pack over the poultice. For warm applications, you can apply a heating pad or hot water bottle over the poultice.