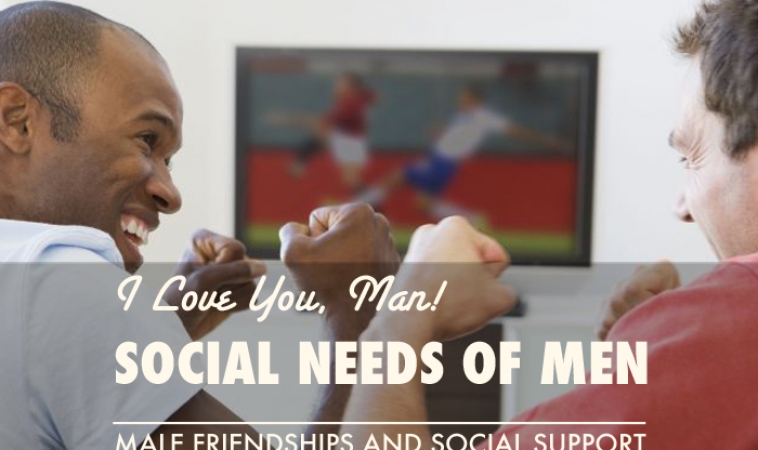 The Necessity of Male Friendships

I was reflecting the other day about the yearly fishing trips, hunting trips and their winter counterpart, the snowmobile trip, my dad used to make with his group of guy friends. I now get why that was so important to him. Apart from work and family obligations, he needed time to be his own man. For my own life, one of the best things about our summer getaway is the hangout time with the guys. It’s not any specific planned activities that are so meaningful, but rather, the moments of being in close proximity, like waking up early and having coffee out on the patio or a spontaneous conversation while staring out at the ocean. What I’m referring to is intimacy between men, and though it’s hard to talk about, it’s as necessary to our health as drinking water. Sebastian Junger, author best known for Perfect Storm wrote about this in his more recent book, War. He says that men get this kind of intimacy with other men in the close quarters of war. They eat together, sleep next to each other, go into dangerous and fearful situations, together. What evolves is a powerful commitment to having another guy’s back. It is so powerful, that men return to the tour of duty because they don’t get that level of tight bonding in daily life here in our society. The craving for that need to care about other men so much that they are willing to take a bullet to protect their buds, is that strong.

“The Army might screw you and your girlfriend might dump you and the enemy might kill you, but the shared commitment to safeguard one another’s lives is unnegotiable and only deepens with time. The willingness to die for another person is a form of love that even religions fail to inspire, and the experience of it changes a person profoundly.”- Sebastian Junger

The juice from that kind of friendship is rare in the lives of men these days. While most of us can’t articulate it, we are lonely and are “lookin for love in all the wrong places”. Here are my thoughts about why this might be.

Boys learn to hide themselves behind a mask of “everything is fine”, so as not to be seen as weak. We learned to compete with each other, setting up a lack in trust for each other. Men have said that asking another man to do something socially give the impression of neediness, which isn’t a hegemonic masculine quality. Additionally, most boys/men have few exposures to good leaders with strong character and positive social relationships with other men. Men are challenged to be with other men socially because of hidden insecurities. Sometimes there are disparities in the levels of what we, as men, have achieved. We are uncomfortable having to measure up to other guys, especially men in our same profession, so we go it alone. We wait and let our social lives get dictated by others- wives, kids, etc.

Men tend to keep a small group of friends. Even with social media, men tend to keep smaller tighter core groups. Because men tend not to reveal much of themselves, they don’t “show their cards” and so they post less frequently, and are less inclusive about whom they choose to share information. We mistrust other men, so we keep our world small and don’t interact with other men, despite the need for the kind of love Junger describes.

Men are willing to risk all kinds of rejection from women, but taking a chance on asking another man to get together is another story

No Space for Men

It hasn’t always been this way. Brett McKay, whose article, “The Decline of Male Space”, which appears on his website, artofmanliness.com, puts his finger clearly on an important issue. Men socialized at work because the workplace was primarily men and men met for a beer at the local bar. These were places where men would be with each other, without the without women. The point isn’t about women in the workplace or in taverns, it’s about what happens as a result of the loss of male space. I still envy men that meet for coffee at the local café at the open community table or booth, which is more common in small towns. Now we sit drinking our latte, staring at a screen. And how about the barbershop? I have three uncles that are/were barbers. Saturday afternoons, my dad would take us in and it was a lengthy social afternoon. The haircut was beside the point (reminds me of the book, Jayber Crow, by the great Wendell Berry, where Jayber is a barber in a rural area. One of my favorite lines is, “You don’t need to be told some things. You can sometimes tell more by a man’s silence and the set of his head than by what he says.” And that’s often how men communicate, not by saying it, but being by being together with other men.) Now, as McKay points out, we get a haircut at a unisex salon, devoid of male camaraderie, and devoid of a shave, with one’s neck under the care of another man. That’s another intimacy. He also includes the gym or boxing club as a place that was once a man’s. It’s not that having women grow into life beyond the kitchen is bad. It’s just that there also grew a mistrust of men together in separate space- mistrust from within and without.

My dad belonged to the Loyal Order of the Moose way back when, and later to the Lion’s club, both of which were among the many fraternal lodges that were popular in the early to mid 20th century but saw decline in the 1970’s and beyond. Men became solitary, independent and without a common spirit. Elks, Freemasons, Shriners, Oddfellows- they held that spirit of brotherhood for each other. And they are mostly gone, at least as spaces where men lived.

Health Effects of Friendships Between Men

Without our male friends, we are vulnerable. Studies show higher sympathetic drive in men with few friends, translating to heart attacks and stroke. Decreased social integration increases our fibrinogen, which leads to clotting in our arteries, part of which is explained by higher levels of smoking with decreased friendships. Close relationships contribute positively to better psychological well-being, decreased depression and suicide levels, lower dropout rates, less risk of becoming a father too soon, lower incidences of drug use and other addictions and less likely to get involved in gangs. Friendships increase our longevity and decrease the incidence of colds. And good friends have our backs. More importantly we have purpose because we have the back of a man who needs us.

I read recently about different types of social integration.1 It went something like this:

I suggest that we take inventory of our own social lives, or those of our fathers, our sons and our patients, to inquire about whether we are getting these levels of interaction with other men in our lives. If not, how does a man get his “guy fix”, short of going in to the military? Men are willing to risk all kinds of rejection from women, but taking a chance on asking another man to get together is another story. That takes courage (more for some than others) and a healthy sense of self, which didn’t get built in many men, primarily because their fathers didn’t have it either.

One solution might be to take a page from the Australians. Down under, and spreading across the globe, men are participating in Men’s Sheds, which are a group of men organized around a singular focus to help some aspect of the community. Some examples given on the website include repairing bicycles for needy children, fixing furniture for the elderly, etc. The shed’s revolve around an activity because it is widely recognized that many men relate well when working with their hands, rather than simply sitting and discussing personal matters. I’m not clear why men’s sheds have not taken off in the U.S., though I might speculate that American men are strongly egocentric, perhaps even pathoadolescent, meaning that they are stuck in “all about me” and haven’t yet evolved into a vision of contributing to something bigger than themselves. But the consequence? Loneliness and disconnection.

Maybe creating a men’s shed would be the right move. If not, maybe something smaller, reminiscent of your dad’s poker night. Not as many men still play cards, but it’s a start. For others, it might be a monthly bike ride, hike, or volunteering in a community event. As I stated earlier, it’s not about the activity, but the moments in between that make the impact. Because these activities are less intense and there may be a lot of “masquerading” it may take a while to build those solid friendships one needs, but in order to reap harvest, one has to plant the seed.