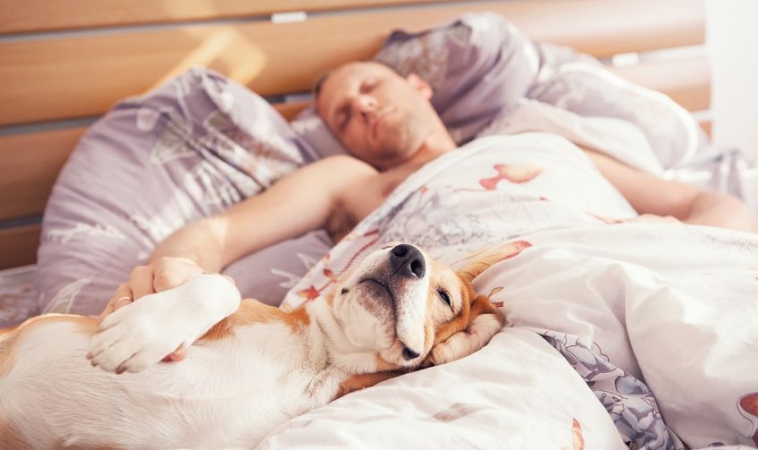 Does Your Pooch Help or Hinder the Quality of your Zzzzzs?

An interesting study was published recently looking at whether or not sleeping with a pet in the room, or sharing the same bed as your dog can inhibit sleep.1 According to the study, 40 million people in the country have a dog, and over half of these people consider their dogs to be kin. So why wouldn’t they let their dog sleep in bed with them? Well, it may have an impact on sleep. And this is not a foreign concept to most of them. According to the study, most people believe that simply having a dog in the bedroom will inhibit sleep. This study did not find this to be true, but did conclude that sleep isn’t as good when a dog actually sleeps in the same bed.

The study looked at healthy individuals between August and December, and evaluated their sleep quality. 40 participants were included in the study, and none had a diagnosed sleep pathology. Their dogs were also assessed. In the study, 88 percent were women, with an average age of 44 years. The average BMI was around 25 (the participants were not obese – which is important since obesity is a major risk factor for sleep apnea, which is often underdiagnosed and affects sleep profoundly). The dogs in the study were of an average weight of 15kg (smaller dogs). Individuals were monitored with an activity monitor and dogs were monitored with an activity monitor that was customized for dogs. The duration of the study was 7 days.

Results showed that humans spent an average of 478 minutes (7.9 hours) in bed, with a total sleep time of 404 minutes (6.7 hours). This is a sleep efficiency on average of 81 percent. Around 71 minutes were spent awake before sleep onset. The dogs had similar sleep times with an average of 413 minutes (6.8 hours) sleep and 62 minutes activity in the bedroom and 2 minutes of play. The study concluded that sleep was significantly affected when a dog slept in the same bed, however there was no effect when the dog was simply in the room.