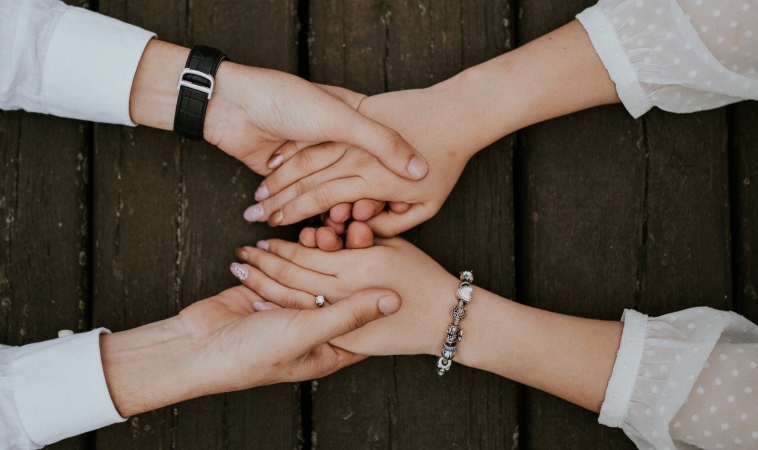 In any stressed or painful situation – a visit to the hospital, a presentation at work, or a funeral for a loved one – it helps to have someone holding your hand. We all know this to be true. Recent experiments have validated our intuitive knowledge and provided explanations as to why having a hand to hold reduces psychological and physical pain.

Going through life holding someone’s hand, literally and metaphorically, reduces the amount of pain and stress we feel and increases mental and physical well-being. Social support is vital to living a long, healthy life.

How clear is the line between self and other?

The research into hand holding suggests that individuals are not as isolated as we may think.

A deep-rooted need for touch

To understand why hand holding is so powerful, first think about the essential nature of physical touch in general. Human beings have a deep-rooted need for touch. The skin is the largest organ in the human body. Touch is the first sense to develop and is intimately connected to our emotions. We feel touch in the womb, as soon as we start to develop a nervous system. A newborn baby needs to be held and is soothed when she is picked up. Think of how heartbreaking it is to see a premature infant in an incubator in the NICU: why is it so difficult to watch her in there? There is nowhere in the world that she would be safer than in that little plastic box. But she’s missing touch. Her parents can’t cradle her. Separation is torturous. That is the power of touch. It is our first experience of love, and we feel it before we ever draw breath.

There is no replacement for a hug when you are sad, hurt, or going through loss. Children who grow up without being held suffer from extreme physical and mental maladies. Even well-adjusted adults can suffer from “touch hunger” if they go too long without any kind of skin-to-skin contact, which leads to depression and anxiety. The increasingly touch-phobic nature of our society has been cited as a contributor to the epidemics of loneliness, drug abuse, and depression in America today, and psychologists have written about the need to increase exposure to touch in everyday life.1

Message of love in hands and heart

More than a means of physical touch, hand holding is also a way to convey empathy. It is an expression of support, love, companionship, and strength. This is notable because empathy is bidirectional in its analgesic properties. This makes sense if you think about what pain really is. Pain is not located at the site of an injury. Pain is in the brain. It is a feeling of distress that runs through your central nervous system. It is often caused by negative physical, emotional, spiritual, or social events. Anything that depresses the lever of distress, including empathy, will provide a degree of pain relief.

Now that you’ve grasped the importance of touch and empathy for pain relief, let’s talk about the science behind hand holding and delve into its effects on the body and brain.

Hand holding reduces stress, and THIS has everything to do with it

Holding hands with a romantic partner reduces stress. In one experiment, a group of researchers measured the effect of hand holding on pupillary dilation. Our pupils dilate as part of our autonomic nervous system’s response to stress. One member of a married couple performed the Stroop task, in which a word is presented in a font color different from the color it actually names (e.g. “blue” would be written in green font) and the participant has to name the font color. The Stroop task is often used as a cognitive stressor. The other member of the couple either held their spouse’s hand or kept their hands on the table. Hand holding reduced pupillary dilation, indicating stress reduction.2

In another study, sixteen women were placed in MRI machines and threatened with an electric shock that was not painful but was stressful. The women reported feeling stress relief when they held their partner’s hand. Holding the experimenter’s hand instead was helpful, but not to the same extent. Interestingly, the quality of their marriages mattered: the stronger the marriage, the greater the reduction in stress.3 This shows us that empathy matters quite a bit even when touch is the only form of communication.

You may be wondering why empathy matters so much. Why wouldn’t holding a stranger’s hand produce the same level of stress relief? It turns out that couples experience a phenomenon called interpersonal synchronization, which is synchronization between two people’s physiological rhythms (heart rate, breathing, gait, etc.). As noted in a previous article, male-female couples in a 2017 study exhibited interpersonal synchronization in the form of synchronized breathing and heart rate when the woman was in pain, and the man held her hand, the hand holding assuaged the woman’s pain.4,5 “The more synchronization the couple showed, the more analgesic (pain reducing) effect was seen with physical touch – which also corresponded with the amount of empathy shown by the male partner.”5

The same group of researchers did a follow-up study to look at the brain activity of couples in a similar setup.6 The woman was again subjected to mild pain and the man held her hand, but this time the participants were hooked up to EEG machines. In line with the previous findings, the couples’ heart rates and breathing began to match up, and this time, their brain waves did too. Again, the more empathetic the male partner, the greater the degree of analgesia.

Brain-to-brain coupling is a way of thinking about the nature of reality and self for social creatures such as humans. Rather than seeing society as a collection of isolated brains in completely independent and impenetrable skulls, brain-to-brain coupling recognizes that two brains (belonging to two humans, of course) interact with each other in a shared space. It acknowledges that we are interconnected with one another, that interacting with others is an inherent part of being human, and that we are not defined in isolation but rather in relationship to one another.

In the hand holding experiments, brain-to-brain coupling was evident in the synchronization of brain waves between the empathic partner and the one who felt stress or pain. The resultant stress relief and analgesia can be explained in one of two possible ways. The first is that touch made the recipient feel supported, thus giving her a sense of community and the natural reward that comes along with it. She felt more of a bond with her significant other than with a stranger, so the reward signal, and associated pain or stress relief, was greater. The other is that the border between self and other may have been blurred to an extent. In this case, the observer transmits support in the form of a harmonization of brain waves that alter the receiver’s mental state.

A biopsychosocial model of pain

The way that researchers think about pain is always evolving. The authors of the pain studies discussed above had this to say about the implications of their research:

“Our findings support the theoretical framework of a biopsychosocial model of pain that suggests a dynamic interaction between biological, psychological, and social factors affecting pain perception. Partner touch (social factor) may help in empathy sharing (psychological factor) with the target of the pain, resulting in analgesia and accompanied by interpersonal central neurophysiological coupling (biological factor).”6

The “central neurophysiological coupling” is a reference to brain-to-brain coupling. As social creatures, human beings exist not as self-contained entities but in communion with others, and thus it makes sense that we get such relief from simply holding another person’s hand.

Studies have shown time and again that strong relationships protect our physical health. People in supportive relationships have better cardiovascular and immune system function, lower rates of depression, and greater overall health. Social isolation is as bad for you as smoking, alcohol abuse, or obesity.7 One hypothesis that explains this phenomenon is that social support reduces the effects of stress, especially during particularly stressful life events such as physical illness or the loss of a loved one.

The hypothalamic-pituitary-adrenal (HPA) axis is the body’s major stress response pathway. When activated by stress, the hypothalamus stimulates the release of the hormone cortisol. Though this is sometimes useful in the short term, as when escaping a dangerous situation, long-term cortisol release has profoundly negative effects.

Earlier, we discussed a study in which the degree of empathy mattered for stress reduction. Those researchers also measured hypothalamic activity. The reduction in the women’s reported stress levels was mirrored by a calming of stress-related neural circuits, including less activation of the hypothalamus.3 A separate study found that participants with better overall health had less hypothalamic activation in response to the threat of electric shock when holding a partner’s hand than did those with poorer overall health.7 These are just two in a long list of studies indicating that the mechanism by which social support promotes health and longevity involves a decrease in hypothalamic activation, and thus cortisol release, in response to stress.

Many ways to ensure the long-term health of your relationship

There are many ways to ensure the long-term health of your relationships. Read more about how relationship dynamics can lead to health or disease here.

Follow me on Facebook at Razi Berry and join us at Love is Medicine  to explore the convergence of love and health.

Photo by Alvin Mahmudov on Unsplash