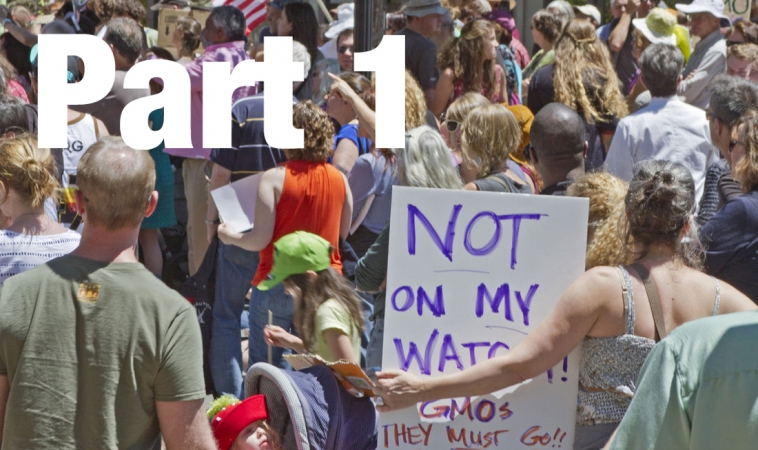 Part II | Why You Should Know To Say No to GMOs

If you speak with any integrative nutritionist or a naturopathic, functional, or holistic doctor, you may notice that there are certain dietary words that make most of them squirm. For example, you probably won’t find one who isn’t “FedUp”1 with sugar– in all its forms and disguises. This is due to this non-nutritive carbohydrate’s irrefutable connection to insulin resistance, heart disease, cancer risk, lipid metabolism disorders, disruption of appetite regulation and cravings, and its addictive qualities.2-9 Therefore, avoiding sugar is one dietary guideline that most wellness experts will agree on.

Still, there are many other areas of nutrition that lack consensus. The result is that many consumers are informed with vast dietary information, yet very confused on what advice to follow. High fat, low fat, low carb, no gluten, what to do!? It seems opinions widely diverge beyond “eating healthy” and “limiting sugar”.

One of the major controversies at present is the presence of genetically modified organisms (GMOs) in our food supply. In fact, recently these genetically engineered (GE) foods, which result in GMOs, are not just up for health debate, they have even entered the political arena with vengeance.10-13

Recently, Vermont was the first state to pass a mandatory GMO “no strings attached” labeling law-Act 120. Shortly thereafter the state was hit with a lawsuit by the Grocery Manufacture’s Association (GMA), the Snack Food Association, the International Dairy Foods Association, and the National Association of Manufacturer which questioned constitutionality of this law.10

Other states have proposed similar propositions with mixed results. In 2013, Connecticut and Main passed labeling laws, but with caveats to enacting them;11,13 whereas, proposition 37 in California failed to pass at all.12 The Center for Food Safety (CFS) reports that in 2013, “In total, 54 bills were introduced across 26 states, and a Washington State ballot initiative narrowly lost, 51-49%. And the momentum is only growing. Already in 2014, 35 bills have been introduced in 20 states, with an Oregon ballot initiative also on target for November 2014.”13 (Oregon’s ballot recently failed but is currently being challenged through a recount).13-15

This political debate is a hot topic, yet for many integrative health and fitness gurus, foods that contain GMOs remain on their food list of “avoid.” Why is this?

What Are Genetically Modified Foods & What’s the Big Deal?

According to the University of California, Division of Agriculture and Natural Resources:

Genetically engineered (GE) food is produced from plants, animals, and microbes that have had their genetic code modified by the selective introduction of specific DNA segments through the use of gene splicing. This process allows the organism to acquire a desirable trait such as pest protection, herbicide resistance, or improved nutritional qualities. Foods produced through genetic engineering or containing genetically engineered ingredients are also frequently known as bioengineered or genetically modified (GM) foods.16

One reason integrative doctors believe it is better to avoid GE foods is due to the fact that these foods have been scientifically manipulated and they haven’t been adequately evaluated for long-term safety for consumption. Therefore, many are convinced that we are in a scientific experiment in which results could be dire in the long-term.

A 2006 report from the University of California proposed that there was no greater risk for safety concerns of GE crops than conventional.16 However, the report did indicate that the following:

The Food and Drug Association (FDA) currently oversees the safety of GE plants and animals.17-18 For GE plants, the FDA basis safety decisions on consultations with the manufacturers of the product;17 whereas for GE animals, the FDA has a set of guidelines under the Federal Food, Drug, and Cosmetic Act (FFDCA). This is because GE animals are defined as “new animal drugs” and are regulated as such.18 The FDA considers these foods as safe as conventionally produced foods.

But are they really?

In Part II of this article, I’m going to provide you with some reasons why you may want to consider reaching for the “GMO-Free” label.

SARAH LOBISCO, ND, is a graduate of the University of Bridgeport’s College of Naturopathic Medicine (UBCNM). She is licensed in Vermont as a naturopathic doctor and holds a Bachelor of Psychology from State University of New York at Geneseo. Dr. LoBisco speaks professionally on integrative medical topics, has several journal publications, and is a candidate for postdoctoral certification in functional medicine. She currently has a private integrative medicine consulting practice located in Ballston Spa, New York, where she incorporates her training in holistic medical practices with conventional medicine.

Note: Her book BreakFree Medicine is due to be released by early next year.