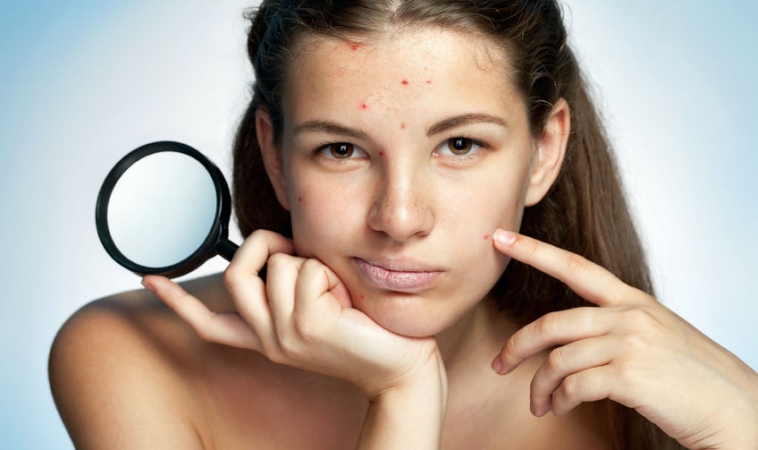 Homeopathy is amazing for treating rashes, especially in children. However, there are a ton of remedies indicated for various types of rashes. It is very important to differentiate the components of a rash when prescribing a homeopathic. Is it an eczema type of rash with a thickening of the skin, and fissuring? Does it itch? Is it hot? Remedies like sulphur, arsenicum, graphites, petroleum, mezereum, or psorinummay be indicated. What if it’s hot, but has more of a raised, “puffy” look, like poison ivy/oak, or an allergic reaction? Remedies like urtica urens, apis, rhus tox, or nat mur.But let’s dive into a very relevant type of rash. Something most of us have dealt with at one time or another during our lives: Acne

Now, first, acne is not going to disappear with a homeopathic remedy alone. However, if you’ve eliminated sugar (or cut it way down), increased your fiber intake, and are eating a fairly healthy diet, these remedies may help significantly.

Calcarea Silicata
Persistent forms of acne, patient may present with constipation, and will often be on the colder end of the temperature spectrum, and will be better from warmth. Worse: Late teens and early twenties. The acne may be painful or itching.

Calcarea Sulphurica
This is a salt of calcarea and sulphur, so both aspects of these common remedies will be present. The acne is very severe, often present in the same location for weeks at a time. There will be a yellow ooze or creamy pus regularly coming from the pimples. This is mostly acne of the face, but interesting locations are ear lobes and the corners of the mouth. There may be a strong sense of jealousy in this remedy.

Hepar Sulphur
The acne is painful and sensitive. They are often small pimples and occur in crops on the forehead or lips. The hepar patient is very vulnerable on all levels.

Kali Bromatum
All kali remedies are defined by an underlying component of rules and structure – especially religious. This is something that will likely be present in some way. The acne is aggressive. It never starts after it begins in adolescence. The pimples can be large and bluish red. They will leave scars. There may be burning. They may be indurated cysts with red surrounding them and yellow pus filled heads. They mainly appear on the center of the forehead, but also on the shoulders and back – rarely on the lower face.

Mercurius
The acne will show a lot of pus through the skin. The pus may discharge easily. There may be blue-red nodules that don’t have any pus at all. Purple skin around the lesions or large cysts surrounded by small pimples. Mercury patients often give off a putrid odor. The acne may actually smell bad.

Silica
The acne may be of a more general nature; the cheeks may be more affected. The pimples may be hard and deep, often not coming to a head; no pus. The pimples may slowly resolve and leave an indentation of a scar. After taking silica the acne may start to discharge – this would be a positive sign.

Sulphur
Sulphur patients often have very oily skin with their acne. This is a common rosacea remedy, especially in men. Acne on the nose, with a lot of redness. Worse with heat, washing, after eating fatty foods. Before menses acne may get worse.

Thuja
Thuja also has very oily skin. The acne may be on the upper lip or forehead. With thuja, the patient may have a lot of feelings of shame or embarrassment about how they look.