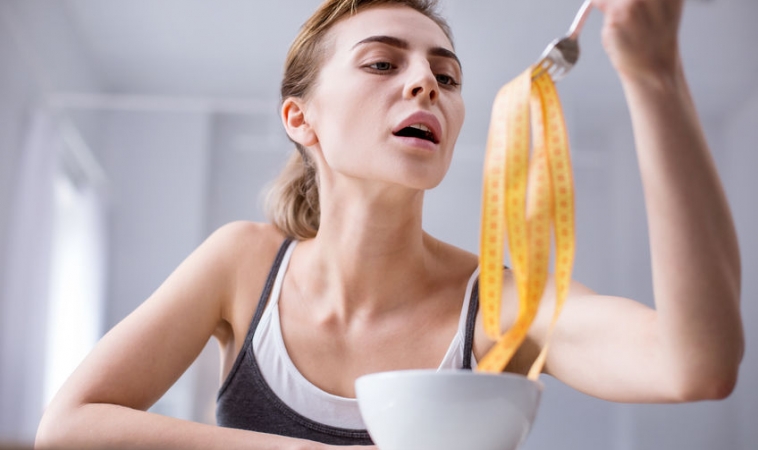 A unique residential study has concluded that, contrary to perceived wisdom, people with eating disorders do not lose self-control — leading to binge-eating — in response to stress. The findings of the Cambridge-led research are published today in the Journal of Neuroscience.

People who experience bulimia nervosa and a subset of those affected by anorexia nervosa share certain key symptoms, namely recurrent binge-eating and compensatory behaviors, such as vomiting. The two disorders are largely differentiated by body mass index (BMI): adults affected by anorexia nervosa tend to have BMI of less than 18.5 kg/m2. More than 1.6 million people in the UK are thought to have an eating disorder, three-quarters of whom are women.

One prominent theory of binge-eating is that it is a result of stress, which causes individuals to experience difficulties with self-control. However, until now, this theory has not been directly tested in patients.

To examine this theory, researchers at the University of Cambridge, working with clinicians at Cambridgeshire and Peterborough NHS Foundation Trust, invited 85 women — 22 with anorexia nervosa, 33 with bulimia nervosa and 30 healthy controls — to attend a two-day stay at Wellcome Trust-MRC Institute of Metabolic Science Translational Research Facility (TRF). The facility, which includes an Eating Behavior Unit, is designed so that a volunteer’s diet and environment can be strictly controlled and their metabolic status studied in detail during a residential status. The setting is intended to be as naturalistic as possible.

During their stay, each morning the women would receive controlled meals provided by a nutritionist. The women then underwent a fasting period during which they were taken to the next door Wolfson Brain Imaging Centre, where they performed tasks while their brain activity was monitored using a functional MRI scanner.

The first tasks involved stopping the progression of a bar rising up a computer screen by pressing a key. The main task involved stopping the moving bar as it reached the middle line. On a minority of trials, stop-signals were presented, where the moving bar stopped automatically before reaching the middle line; participants were instructed to withhold their response in the event of a stop-signal.

The women then performed a task aimed at raising their stress levels. They were asked to carry out a series of mental arithmetic tests while receiving mild but unpredictable electric shocks, and were told that if they failed to meet the performance criterion, their data would be dismissed from the study. They were given feedback throughout the task, such as ‘Your performance is below average’.

The women then repeated the stop-signal task again.

Once the tasks had been completed — but while the volunteers might still be expected to be in a heightened state of stress — they returned to the Eating Behavior Unit, where they were offered an ‘all you can eat’ buffet in its relaxing lounge and were told they could eat as much or as little as they would like.

On the second day of their study, the volunteers carried out the same tasks, but without the added stress of unpleasant electric shocks and pressure to perform. (For some participants, the order of the days was reversed.)

Dr Margaret Westwater, who led the research while a PhD student at Cambridge’s Department of Psychiatry, said: “The idea was to see what happened when these women were stressed. Did it affect key regions of the brain important for self-control, and did that in turn lead to increases in food intake? What we found surprised us and goes counter to the prevailing theory.”

The team found that even when they were not stressed, those women with bulimia nervosa performed worse on the main task, where they had to stop the rising bar as it reached the middle bar — but this was not the case for those women affected by anorexia nervosa. This impairment occurred alongside increased activity in a region in the prefrontal cortex, which the team say could mean these particular women were unable to recruit some other regions required by the brain to perform the task optimally.

Interestingly — and contrary to the theory — stress did not affect the actual performance in any way for either of the patient groups or the controls. However, the patient groups showed some differences in brain activity when they were stressed — and this activity differed between women with anorexia and those with bulimia.

While the researchers observed that the patients in general ate less in the buffet than the controls, the amount that they ate did not differ between the stress and control days. However, activity levels in two key brain regions were associated with the amount of calories consumed in all three groups, suggesting that these regions are important for dietary control.

Dr Westwater added: “Even though these two eating disorders are similar in many respects, there are clear differences at the level of the brain. In particular, women with bulimia seem to have a problem with pre-emptively slowing down in response to changes in their environment, which we think might lead them to make hasty decisions, leaving them vulnerable to binge-eating in some way.

“The theory suggests that these women should have eaten more when they were stressed, but that’s actually not what we found. Clearly, when we’re thinking about eating behavior in these disorders, we need to take a more nuanced approach.”

In findings published last year, the team took blood samples from the women as they performed their tasks, to look at metabolic markers that are important for our sense of feeling hungry or feeling full. They found that levels of these hormones are affected by stress.

Under stress, patients with anorexia nervosa had an increase in ghrelin, a hormone that tells us when we are hungry. But they also had an increase in peptide tyrosine tyrosine (PYY), a satiety hormone. In other words, when they are stressed, people with anorexia nervosa produce more of the hunger hormone, but contradictorily also more of a hormone that should tell them that they are full, so their bodies are sending them confusing signals about what to do around food.

The situation with bulimia nervosa was again different: while the team saw no differences in levels of ghrelin or PYY, they did see lower levels of cortisol, the ‘stress hormone’, than in healthy volunteers. In times of acute stress, people who are chronically stressed or are experiencing depression are known to show this paradoxical low cortisol phenomenon.

Professor Paul Fletcher, joint senior author at the Department of Psychiatry, said: “It’s clear from our work that the relationship between stress and binge-eating is very complicated. It’s about the environment around us, our psychological state and how our body signals to us that we’re hungry or full.

“If we can get a better understanding of the mechanisms behind how our gut shapes those higher order cognitive processes related to self-control or decision-making, we may be in a better position to help people affected by these extremely debilitating illnesses. To do this, we need to take a much more integrated approach to studying these illnesses. That’s where facilities such as Cambridge’s new Translational Research Facility can play a vital role, allowing us to monitor within a relatively naturalistic environment factors such as an individual’s behavior, hormone levels and, brain activity.”

The research was funded by the Bernard Wolfe Health Neuroscience Fund, Wellcome, the NIH-Oxford-Cambridge Scholars Program and the Cambridge Trust. Further support was provided by the NIHR Cambridge Biomedical Research Centre.