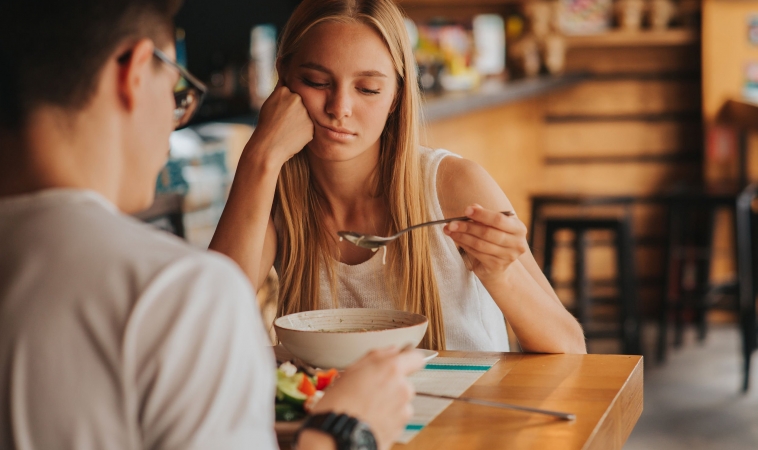 Your diet can put you at risk of depression, according to a new study. The study also found that the likelihood of depression is higher among middle-aged and older women who were immigrants to Canada when compared to Canadian-born women.

“Lower intakes of fruits and vegetables were found to be linked to depression for both men and women, immigrants and those born in Canada,” said Dr. Karen Davison, Health Science Program Chair at Kwantlen Polytechnic University in Surrey, B.C., who led the study. “Men were more likely to experience depression if they consumed higher levels of fat, or lower levels of omega-3 eggs. For all participants, lower grip strength and high nutritional risk were associated with depression.

Various minerals and vitamins present in fruits and vegetables

“We were interested to learn that omega-3 polyunsaturated fats were inversely associated with depression among men. Future research is needed to explore the pathways but it is plausible that increased omega-3 fatty acid concentration in the diet may influence central nervous system cell-membrane fluidity, and phospholipid composition, which may alter the structure and function of the embedded proteins and affect serotonin and dopamine neurotransmission,” said Yu Lung, co-author and doctoral student at University of Toronto’s Factor-Inwentash Faculty of Social Work (FIFSW).

Depression was associated with the following

Depression was associated with having chronic pain and at least one chronic health condition for both men and women, this study found. “This finding underlines the importance of health professionals being aware of the mind-body connection, with the hope that the alleviation of chronic pain may facilitate better mental health” says co-author Dr. Hongmei Tong, Assistant Professor of Social Work at MacEwan University in Edmonton.

“In addition to nutritional intake, it is important to consider influences earlier in life including immigration status, education and income as these are also crucial to the mental health of older Canadians,” says co-author Shen (Lamson) Lin, doctoral candidate at FIFSW.

Study also found the likelihood of depression higher among these groups

For immigrant women, the study also found that the likelihood of depression is higher among those middle-aged and older when compared to Canadian-born women.

The links between immigrant status and depression may be attributed to many factors. “Among women, but not men, immigrant status was associated with depression,” says senior author, Professor Esme Fuller-Thomson at FIFSW and director of the Institute for Life Course & Aging. “The older immigrant women in this study may have reported depression as a result of the substantial stress associated with settling in a new country such as having insufficient income, overcoming language barriers, facing discrimination, adapting to a different culture, reduced social support networks, and having their education and work experiences unrecognized.”

“It was surprising that immigrant men, who face many of these same settlement problems, did not have higher levels of depression than their Canadian-born peers,” says co-author Dr. Karen Kobayashi, Associate Dean Research and Graduate Studies in the Faculty of Social Sciences, professor in the Department of Sociology and a research affiliate at the Institute on Aging & Lifelong Health at the University of Victoria. “Although we did not have the data to explore why there was a gender difference, it may be that in these older married couples it was the husband who initiated the immigration process and the wives may not have as much choice about whether or not they wanted to leave their homeland.”

The study was based on analysis of the Canadian Longitudinal Study on Aging data and included a sample of 27,162 men and women aged 45-85 years, of whom 4,739 are immigrants. The article was published in BMC Psychiatry.

“The study findings may help to define programs and policies that could help immigrants transition positively to Canadian culture,” adds Dr. Davison. “In addition, this investigation helps to highlight the need to consider nutrition-related programming and policies relevant for all Canadians.”