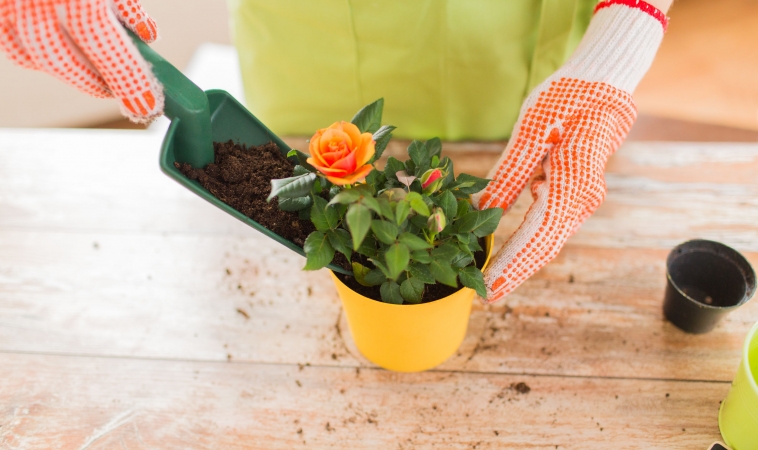 As civic leaders and urban planners work to make cities more sustainable and livable by investing in outdoor spaces and recreational activities such as biking and walking, Princeton researchers have identified the benefit of an activity largely overlooked by policymakers — home gardening.

The researchers found that, across the study’s population, the level of emotional well-being, or happiness, reported while gardening was similar to what people reported while biking, walking or dining out, according to a study published in the journal Landscape and Urban Planning. Home gardening was the only activity out of the 15 studied for which women and people with low incomes reported higher emotional well-being than men and medium- and high-income participants, respectively.

“This has implications for equity in food action planning considering that people with lower incomes tend to have less access to healthy food options,” said corresponding author Anu Ramaswami, Princeton’s Sanjay Swani ’87 Professor of India Studies, professor of civil and environmental engineering and the Princeton Environmental Institute (PEI). “Gardening could provide the health benefits of fresh fruits and vegetables, promote physical activity, and support emotional well-being, which can reinforce this healthy behavior.”

The benefits of gardening on happiness were similar across racial boundaries and between urban and suburban areas, said first author Graham Ambrose, a research specialist in Princeton’s Department of Civil and Environmental Engineering. In addition, whether people gardened alone or with others made no difference, and people who kept vegetable gardens reported a higher level of average emotional well-being than people who worked in ornamental gardens.

The findings came from a study of 370 people in the Minneapolis-St. Paul metropolitan area

The findings came from a study of 370 people in the Minneapolis-St. Paul metropolitan area for which people used a cellphone app called Daynamica to report their emotional well-being while engaged in any of 15 daily activities. The app was developed by study co-author Yingling Fan, a professor of urban and regional planning at the University of Minnesota, who led a larger emotional well-being study as a part of the National Science Foundation-funded Sustainable Healthy Cities Network led by Ramaswami. Co-author Kirti Das, a postdoctoral research associate in civil and environmental engineering at Princeton, was instrumental in recruiting participants from a range of communities and in implementing the survey.

As part of ongoing research into urban food systems in Ramaswami’s Sustainable Urban Infrastructure Systems Lab, she and Ambrose contributed questions to the survey that specifically related to household vegetable gardening. While the social and environmental benefits of community gardens are hot topics in urban research, available data seem to fall short when it comes to gardening in individual households, Ambrose said.

“People know where community gardeners garden, but it is hard to know who is gardening at home, which our group uniquely identified,” Ambrose said. For example, study authors found that 31% of participants engaged in home gardening for about 90 minutes per week on average, compared to 19% who engaging in biking (an average of 30 minutes each week) and 85% who walked (an average of one hour and 40 minutes each week).

“Many more people garden than we think and it appears that it associates with higher levels of happiness similar to walking and biking,” Ramaswami said. “In the movement to make cities more livable, gardening might be a big part of improving quality-of-life.”

Gardening was among the top five activities in terms of meaningfulness

The researchers found that home gardening was among the top five activities in terms of how meaningful an activity felt to people while engaging in it.

“The high levels of meaningfulness that respondents reported while gardening might be associated with producing one’s own food,” Ambrose said. “The boost to emotional well-being is comparable to other leisure activities that currently get the lion’s share of infrastructure investment. These finding suggest that, when choosing future well-being projects to fund, we should pay just as much attention to household gardening.”

A few cities have conducted pilot household gardening projects with promising results. For example, a project operated by the Phipps Conservatory and Botanical Gardens in Pittsburgh provided participants with materials and training to start a garden at home. In 2017, three years after the project began, 70% of participants were still actively gardening.

The researchers of the current study plan to replicate this work among community gardeners in order to compare the emotional benefit of household gardens versus community gardens, Ramaswami said. These results will be important for food action planning in cities such as Minneapolis where Ramaswami has an ongoing project with community members and organizations, as well as the City of Minneapolis, to develop a food action plan.