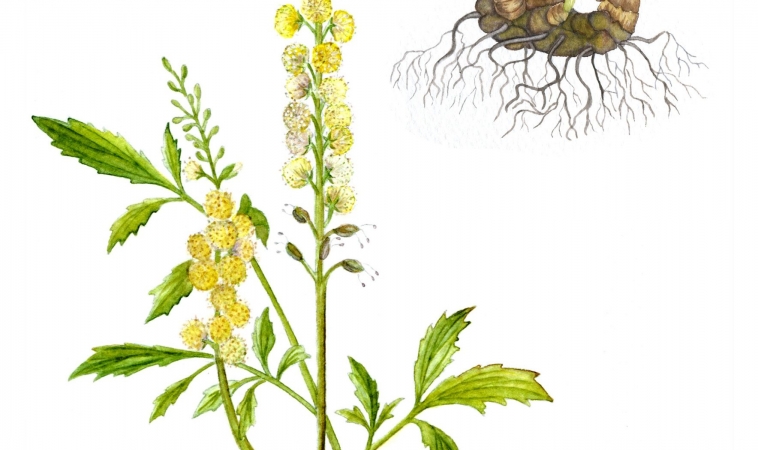 Vasomotor instability (hot flashes and night sweats) is the most commonly reported complaint made by women in the perimenopausal and menopausal period. It is estimated that approximately three-quarters of all women will be affected by hot flashes or night sweats at some point during menopause with negative implications to quality of life, activities of daily living, and well-being. To date, the most effective and most commonly prescribed treatment for menopausal vasomotor symptoms is hormone replacement therapy (HT). However, many women are either reluctant to consider this option or are not candidates for HT due to the increased risk of hormonal related cancers and cardiovascular disease. For this reason, alternative natural medicine solutions are needed to support women as they transition through the perimenopausal and menopausal phase.

As a naturopathic physician with a primary focus in women’s health and menopause, I am so grateful to be able to navigate women through the many natural treatment options available to them to mitigate the undesirable effects that vasomotor instability can bring. Attempting a natural medicine protocol on your own can be daunting! There are so many factors that need to be taken into consideration before choosing a natural therapy including therapeutic dosage, duration of use, individual risk factors, drug-herb interactions, and concomitant symptoms. Always consult with your naturopathic physician before embarking on a natural medicine protocol to ensure appropriate use and safety of natural medicines. The following are my top three plant-based medicines to support bothersome menopausal hot flashes and night sweats (in no particular order). 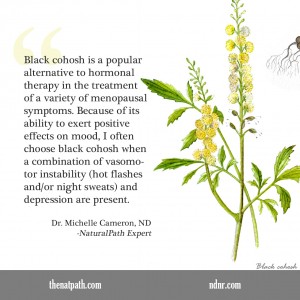 Black cohosh is a popular alternative to hormonal therapy in the treatment of a variety of menopausal symptoms. Because of its ability to exert positive effects on mood, I often choose black cohosh when a combination of vasomotor instability (hot flashes and/or night sweats) and depression are present.

Phytoestrogens are plant-based estrogens thought to mimic the effects of naturally occurring estrogens in the female body. Black cohosh is often grouped with other plants thought to elicit phytoestrogenic properties such as red clover, dong quai, maca, and ginseng. . Much of the research done on black cohosh, however, suggests that black cohosh does not elicit estrogen-stimulating effects and is not considered a phytoestrogen.

In fact, a six-week in vivo study investigating the ability of black cohosh to stimulate estrogen-receptor positive cells in an animal model found no estrogen stimulating effects. Levels of prolactin, follicle-stimulating hormone (FSH), leutenizing hormone (LH), and estradiol levels were unchanged with black cohosh supplementation. 2 Furthermore, black cohosh use was associated with a 61 percent reduction in the risk of breast cancer in one small study. 3For these reasons, I am comfortable choosing black cohosh as a natural treatment to support hot flashes in a woman with a history of breast cancer or in females considered high risk for developing breast cancer.

Maca is a traditional Peruvian root with a wide variety of medicinal uses. While maca has a long-standing reputation for soothing menopausal complaints, it is also touted for its ability to improve libido, increase energy, and combat stress through its positive adaptogenic effects on the adrenal glands. Maca is also an extremely nutrient dense plant rich in vitamins, minerals, amino acids, and fiber. For this reason, maca is my go-to choice for the stressed out woman with vasomotor instability, fatigue, and low libido.

A study published in the International Journal of Biomedical Sciences evaluated the impact of 2000 mg maca daily as compared to placebo in the treatment of a variety of menopausal symptoms. Women taking maca were found to have a significant alleviation of menopausal symptoms as expressed by a reduction in frequency and severity of hot flashes and night sweats. Two months administration of daily maca use also resulted in significant reductions of FSH levels with simultaneous increases in estradiol levels in early postmenopausal women. 4

Women should be aware that there are 13 different phenotypes of maca, with varying colors, DNA profiles, and active ingredients with the ability to elicit diverse effects. Maca also has low bioavailability and can be difficult to digest if not processed in a manner to overcome absorption issues. For this reason, the type of maca product that is prescribed is important. Choosing a bulk maca product at your local health food store may not be effective or have the intended effect for these reasons.

The roots of Siberian rhubarb contain a special phytoestrogen extract referred to in the scientific literature as ERr731. While the mechanism of action of this particular extract is not completely understood, ERr731 is thought to enhance neurotransmitter levels and thereby offers menopausal symptom relief in a manner similar to mood modulators (antidepressants), which have a known impact on relieving hot flashes. 5 Because Siberian rhubarb does not contain a high concentration of anthraquinones, it does not elicit a laxative effect commonly associated with other types of rhubarb known commonly used for this purpose.

The extract from Siberian rhubarb has been shown to elicit a decrease in hot flashes similar to low dose hormone therapy. 112 symptomatic perimenopausal women were given either one tablet of ERr731 (n = 56) or placebo (n = 56) daily over a period of 12 weeks. Those participants taking Err731 showed a significant reduction in the number of hot flashes from a median of 12 daily to 2. Also of interest, those with more severe hot flashes received the greatest benefit from the intervention. 6

Fortunately, a wide variety of plant-based therapeutics is available to women to combat the unwanted hot flashes and/or night sweats that may accompany the perimenopausal and menopausal period. Red clover, chaste tree, St. John’s wort, pycnogenol, and soy are also quite effective in relieving vasomotor instability when used appropriately. In the past two years, research on valerian and melatonin have also been shown to reduce menopausal hot flashes and night sweats with the added benefit of improving sleep! Naturopathic medicine shines in its ability to support women naturally as they transition through the perimenopausal and menopausal period with little to no adverse side effects. For those women who are either not candidates for hormone therapy or for those concerned about negative side effects associated with HT, natural medicine can offer a safe and effective solution. 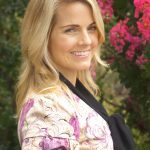 Dr. Michelle Cameron is a licensed naturopathic physician and graduate of the National College of Natural Medicine (NCNM) in Portland, OR, where she received a Doctorate of Naturopathic Medicine in 2013. Following graduation, Dr. Cameron completed a two-year residency program with a primary focus in women’s health and gynecology under the mentorship of Dr. Tori Hudson. She currently maintains a private practice at A Woman’s Time, an integrative natural medicine clinic located in downtown NW Portland.

Dr. Cameron has a strong understanding and passion for bio-identical hormone prescription and enjoys treating women of all ages and stages of life for their unique health care needs. Strong areas of focus for Dr. Cameron also include polycystic ovarian syndrome (PCOS), endometriosis, chronic vaginitis, weight loss, and cervical dysplasia. She is also trained as a holistic pelvic floor provider and provides pelvic floor therapy for the treatment of a variety of pelvic issues. Dr. Cameron is currently the only physician in Portland who offers the O-shot®, a non-invasive procedure that utilizes the healing potential of platelet-rich plasma in the treatment of female sexual dysfunction and urinary stress incontinence. In her down time, she loves cooking, gardening, exercising, and sleeping.