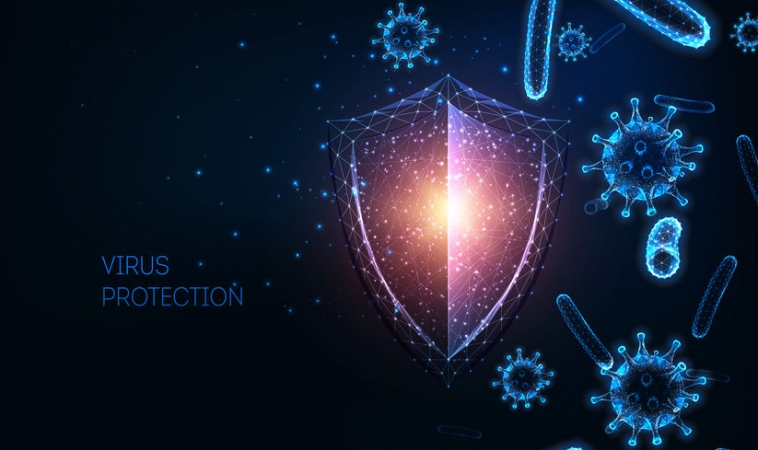 Scientists are opening new windows into understanding more about the constantly shifting evolutionary arms race between viruses and the hosts they seek to infect. Host organisms and pathogens are in a perennial chess match to exploit each other’s weaknesses.

Such research holds tantalizing clues for human health since the immune system is on constant alert to deploy counter measures against new viral attacks. But unleashing too much of a defensive response can lead to self-inflicted tissue damage and disease.

A new study published in the journal eLife by biologists at the University of California San Diego has revealed insights on the intricate, adaptive mechanisms of a protective system employed by the cells of mammalian immune systems. Through a multidisciplinary approach that combined bioinformatics, biochemistry and virology, Biological Sciences graduate students Brian Tsu, Chris Beierschmitt and Andy Ryan, Assistant Professor Matt Daugherty and their collaborators at UC Berkeley found surprising defensive functions coordinated by a protein called NLRP1, which serves as a sensor for invasive pathogens.

The study involved Picornaviridae family viruses, which generate proteases, or molecular “scissors,” that can cleave and activate NLRP1. These viruses include human pathogens such as poliovirus, coxsackievirus (responsible for hand, foot and mouth disease) and rhinovirus (one of the most frequent causes of the common cold). The analysis revealed that NLRP1 has recently evolved to “sense” these viral proteases through a type of trap that sets off an immune response in reaction to being cut by the viral proteases. Interestingly, NLRP1 has evolved to do this by mimicking natural sites that the viral protease normally needs to cut in order for the virus to replicate, making it difficult for the virus to avoid cleaving NLRP1 while maintaining its ability to survive.

“In our paper we’re showing that NLRP1 acts to bait viral protease cleavage and set off a sort of alarm, or tripwire, in the organism,” said Tsu, the lead author of the study. “This is like an Achilles heel to the virus. This allows the host organism to evolve ways to take advantage of this evolutionarily constrained cleavage.”

“We often think of viruses taking advantage of the fact that hosts evolve slowly, but we’re seeing that the hosts have turned the tables and used the fact that the viruses are really stuck here to their advantage, and therefore they use this constraint to activate an immune response.”

While evolution is often considered to occur one step after another, the viruses analyzed in this study would need to simultaneously alter numerous regions within their viral proteins to evolve around the tripwire defense, which would be extremely difficult.

The research was derived in cells but lays the groundwork for potential future clinical applications in which the tripwire function could be employed in immune defenses in human systems such as the lungs, brain and other areas. Based on the study’s results in individual cells, new research avenues are opening to investigate how the tripwire operates across entire organisms.

“I’m particularly excited about looking for more of these cases because this is an evolutionarily elegant way of detecting and responding to viral infection,” said Daugherty.