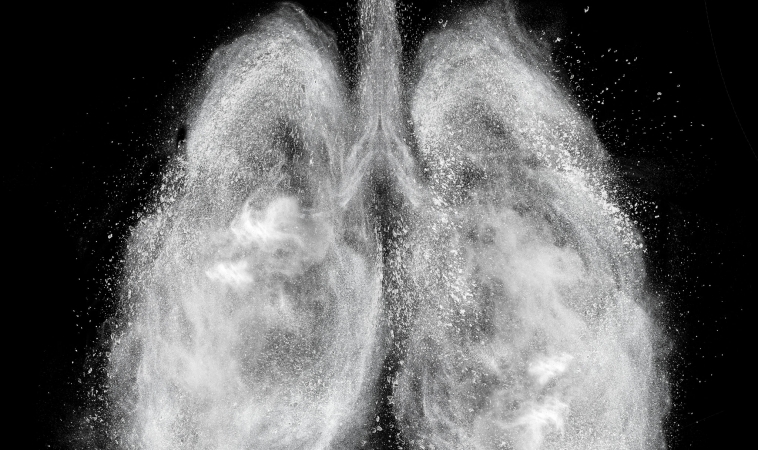 Scientists at Stanford University have designed an electrocatalytic mechanism that works like a mammalian lung to convert water into fuel. Their research, published December 20 in the journal Joule, could help existing clean energy technologies run more efficiently. 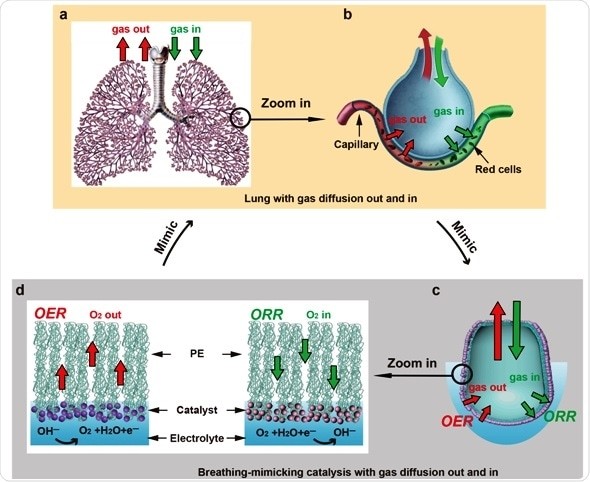 The act of inhaling and exhaling

The act of inhaling and exhaling is so automatic for most organisms that it could be mistaken as simple, but the mammalian breathing process is actually one of the most sophisticated systems for two-way gas exchange found in nature. With each breath, air moves through the tiny, passage-like bronchioles of the lungs until it reaches diminutive sacs called alveoli. From there, the gas must pass into the bloodstream without simply diffusing, which would cause harmful bubbles to form. It’s the unique structure of the alveoli–including a micron-thick membrane that repels water molecules on the inside while attracting them on the outer surface–that prevents those bubbles from forming and makes the gas exchange highly efficient.

Scientists in senior author Yi Cui’s lab at the Department of Materials Science and Engineering at Stanford University, drew inspiration from this process in order to develop better electrocatalysts: materials that increase the rate of a chemical reaction at an electrode.

“Clean energy technologies have demonstrated the capability of fast gas reactant delivery to the reaction interface, but the reverse pathway–efficient gas product evolution from the catalyst/electrolyte interface–remains challenging,” said Jun Li, the first author of the study.

The team’s mechanism structurally mimics the alveolus and carries out two different processes to improve the reactions that drive sustainable technologies such as fuel cells and metal-air batteries.

The first process is analogous to exhalation. The mechanism splits water to produce hydrogen gas, a clean fuel, by oxidizing water molecules in the anode of a battery while reducing them in the cathode. Oxygen gas (along with the hydrogen gas) is rapidly produced and transported through a thin, alveolus-like membrane made from polyethylene–without the energy costs of forming bubbles.

The second process is more like inhalation and generates energy through a reaction that consumes oxygen. Oxygen gas is delivered to the catalyst at the electrode surface, so it can be used as reactant during electrochemical reactions.

While it’s still early, design appears to be promising

Although it is still in the early phases of development, the design appears to be promising. The uncommonly thin nano-polyethylene membrane remains hydrophobic longer than conventional carbon-based gas diffusion layers, and this model is able to achieve higher current density rates and lower overpotential than conventional designs.

Lung-inspired design still has some room for improvement

However, this lung-inspired design still has some room for improvement before it will be ready for commercial use. Since the nano-polyethylene membrane is a polymer-based film, it cannot tolerate temperatures higher than 100 degrees Celsius, which could limit its applications. The team believes this material may be replaced with similarly thin nanoporous hydrophobic membranes capable of withstanding greater heat. They are also interested in incorporating other electrocatalysts into the device design to fully explore their catalytic capabilities.

“The breathing-mimicking structure could be coupled with many other state-of-the-art electrocatalysts, and further exploration of the gas-liquid-solid three-phase electrode offers exciting opportunities for catalysis,” Said Jun Li.