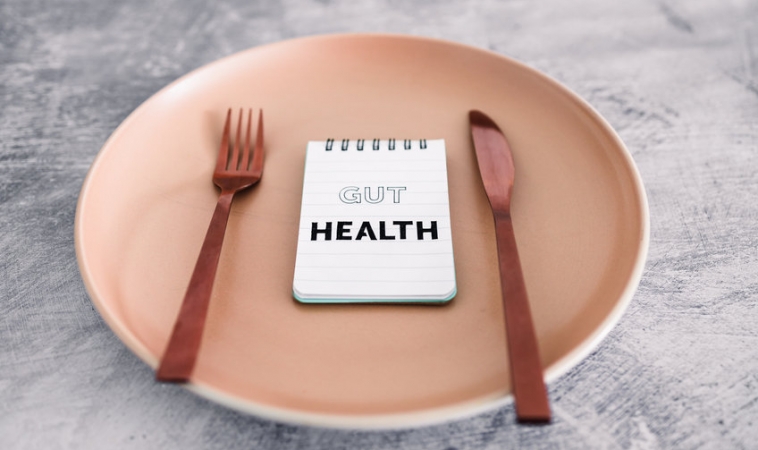 The cliché “you are what you eat” has been used for hundreds of years to illustrate the link between diet and health. Now, an international team of researchers has found the molecular proof of this concept, demonstrating how diet ultimately affects immunity through the gut microbiome.

The work, conducted in mice, reveals that what animals consume initiates the release of a metabolic byproduct from a specific gut microbe that, in turn, modulates the animals’ gut immunity.

The findings, published inNature, offer a unifying explanation for the complex interplay between diet, gut microbiota, and immune function. They are the result of collaboration among scientists at Harvard Medical School, Brigham and Women’s Hospital, Seoul National University, and Monash University in Australia.

The experiments pinpoint a microbial molecule, the synthesis and release of which are influenced by host diet. That molecule, in turn, stimulates the activation and signaling of a subset of cells known as natural killer (NK) T cells, which are involved in immune regulation and implicated in a range of inflammatory conditions.

While scientists have surmised for a long time that diet plays a role in immune health, the new study elucidates the precise molecular cascade behind this interplay, said study senior author Dennis Kasper, professor of immunology in the Blavatnik Institute at Harvard Medical School.

If confirmed in larger animals and eventually in humans, the findings can help inform the design of small-molecule treatments that enhance both intestinal and overall immunity, the researchers said.

“Gut-resident microbes produce molecules with enormous structural diversity. We used microbial and chemical tools to elucidate how these molecules are synthesized by gut bacteria and how they act in the host gut,” said study first author Sungwhan Oh, a principal investigator at the Center for Experimental Therapeutics and Reperfusion Injury at Brigham and Women’s Hospital and a former postdoctoral fellow in the Kasper lab.”Our findings yield fascinating insights about the microbiome, diet, and immune function and provide interesting clues about how molecules made by our inner neighbors can be used to design therapies.”

In a series of experiments, the team identified the immune-signaling cascade triggered by the metabolic breakdown of dietary amino acids in the mouse gut. This multistep pathway begins with an animal consuming food that contains branched-chain amino acids, so named for the tree branch-like structure of one of their molecular chains. The branched-chain amino acids are then taken up by B. fragilis, a gut-resident microbe, and converted by a specific enzyme into sugar-lipid molecules that also have branched chains. B. fragilis then releases branched-chain molecules that are spotted and picked up by a class of immune-signaling cells known as antigen-presenting cells, which in turn induce NK T cells to exercise their immunoregulatory response through upregulating inflammation-controlling genes and immune-regulatory chemicals.

Notably, the experiments demonstrated that it is the branching of the chain structure that initiates the cascade. Straight-chain versions of the molecule did not yield the same effect. Furthermore, the team found that B. fragilis alters the structure of the sugar-lipid molecules that it metabolizes and renders them better capable of binding to receptors on specific immune cells and initiating a signaling cascade that culminates in downregulating inflammation.

Study coinvestigator Seung Bum Park, professor of chemistry at Seoul National University, synthesized, and the Harvard team tested, 23 different configurations of the microbe-made immunomodulatory molecule to determine how each one interacts with the immune cells that regulate inflammation.

The Harvard team’s experiments revealed that synthetic, lab-made branched-chain lipid molecules induced NK T cells to release the immune-signaling chemical IL-2, whereas the lab-made straight-chained versions of these molecules did not. Thus activated, the NK T cells, in turn, induced the expression of genes that regulate immunity but not of genes that drive inflammation.

Using a structural biology approach, Jamie Rossjohn, professor of biochemistry and molecular biology at Monash Biomedicine Discovery Institute in Australia, elucidated how the lipid structure engages with and binds to antigen presenting cells — the immune cells that give NK T cells the go-ahead to produce anti-inflammatory chemicals.

In a final step, the researchers treated mice with ulcerative colitis with the branched-chain sugar-lipid molecule. Animals that received treatment with the branched-chain molecule fared much better than untreated animals. They not only gained weight, but when researchers examined the gut cells of the mice under a microscope, they observed that these cells also had minimal signs of colon inflammation.

Taken together, the experiments provide a structural and molecular explanation of previously observed anti-inflammatory effects of this class of sugar-lipids produced by the gut microbe B. fragilis.

“This work offers a great example of transdisciplinary discovery-based research aimed at answering a major question in biomedical sciences, namely, how the immune system can be modulated by the interplay between diet and the microbiota,” Rossjohn said.

In 2014, Kasper and colleagues published a study showing that a sugar-lipid molecule released by B. fragilis had anti-inflammatory effects on the gut and protected mice from colitis, but the scientists did not know how these molecules were made by the microbe, nor the specific structural features of the sugar-lipids that conferred the anti-inflammatory effect. The current study answers this question demonstrating that the sugar-lipid molecules made by this particular organism are branched-chain and it is precisely that branched-chain structure that allows them to bind to immune cells in a way that dampens these cells’ proinflammatory signaling.

The findings offer hope that inflammatory diseases mediated by these NK T cells could one day be treated with inflammation-dampening microbial molecules made in the lab, the researchers said.

The exact function of NK T cells — the immune cells that the microbe-made molecule ultimately activates to control colonic inflammation in mice — is not well-understood, Kasper said. However, given that these cells line the human gastrointestinal tract and the lungs and are also found in the liver and spleen, they likely play a significant role in immune regulation. Previous research points to these cells’ likely involvement in a range of inflammatory conditions, including ulcerative colitis, and to a possible role in airway inflammatory conditions such as asthma.

“We can never isolate enough of these immune-modulatory molecules from bacteria for therapeutic use, but the beauty of this is now we can synthesize them in the lab,” Kasper said. “The idea would be that we’d have a drug that can modulate inflammation in the colon and beyond.”

The work was supported by National Institutes of Health grants K01-DK102771, R01-AT010268, and R01-DK044319; by Department of Defense grant W81XWH-19-1-0625; by Brigham and Women’s Hospital Department of Anesthesiology, Perioperative and Pain Medicine Basic Science Grant; by the National Research Foundation of Korea grants 2014R1A3A2030423 and 2012M3A9C404878; and by the Australian Research Council grant CE140100011 and Australian Research Council Laureate Fellowship and Future Fellowships.