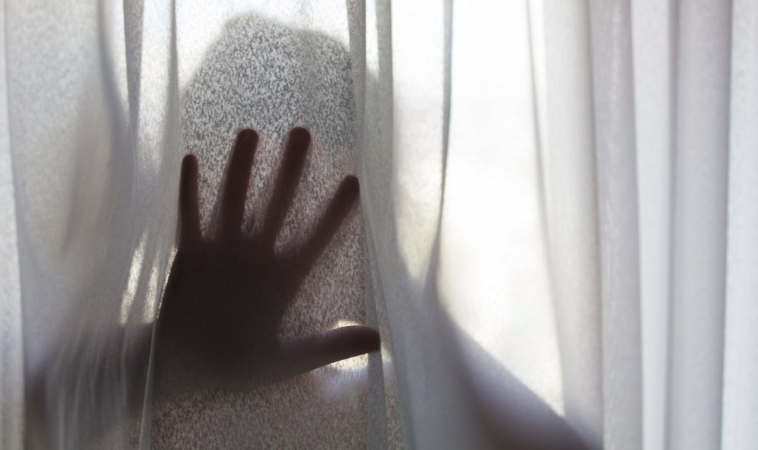 Traumatic experiences and stressors in childhood have historically been overlooked as predisposing factors in the development of various chronic pain disorders and psychiatric conditions, including fibromyalgia, irritable bowel syndrome, insomnia, depression, anxiety, post-traumatic stress disorder, and chronic fatigue syndrome. However, the tide is turning as research is revealing a significant correlation between childhood trauma and adult health. 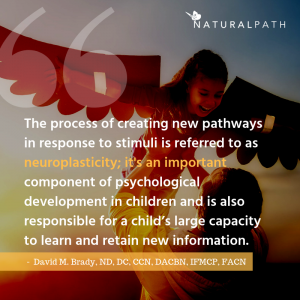 The central nervous system is rapidly developing during childhood and being conditioned to respond to various stimuli and stressors that are encountered in life. As an assortment of environmental stimuli are encountered, new pathways are created between the cells of the brain in response to each stimulus. For example, a pleasurable experience such as a hug from a caregiver, a sweet food, or playing in the sand at a beach creates pathways that teach the brain to respond pleasurably to those stimuli. Likewise, a frightening experience such as screaming will create and exercise pathways that respond in fear. This process of creating new pathways in response to stimuli is referred to as neuroplasticity. It is an important component of psychological development in children and is also responsible for a child’s large capacity to learn and retain new information. As we age, neuroplasticity decreases, meaning it is more difficult to develop new pathways and adjust our brain’s responses to stimuli. Children are at a distinct advantage in possessing a high degree of neuroplasticity. However, this also highlights the importance of delivering meaningful stimuli to the developing brain, to ensure the development of positive pathways.

In the presence of a dependable support system and normal, short-lived stressors, a child’s stress responses are appropriately activated and buffered through supportive relationships. As a child’s psychological and psychosomatic development matures in a supportive environment, positive pathways are developed in the brain, training the nervous system to appropriately respond to and independently coregulate with the normal stressors of life. As the brain encounters increasingly difficult yet normal stressors, a healthy resilience is built and circumstances are able to be experienced with normal biological responses.

Conversely, in the absence of supportive relationships or in the presence of extreme and/or long-standing stressors, the stress response is inappropriately activated and may negatively impact the development of the brain and neurological system. Examples of uncommon and traumatizing stressors may include parental abandonment or neglect, abuse of various forms, frequent changes in environment or schedules, and severe illnesses or hospitalizations. As regions of the brain that are responsible for fear, anxiety and impulsive responses are activated, neural pathways are developed to favor these regions of the brain. Subsequently, regions of the brain that are responsible for reasoning, planning and behavioral control may lack appropriate pathways as they are not frequently exercised in a safe context, leading to a propensity toward negative emotions such as fear, anxiety, panic attacks, and depression. In short, the brain becomes hyperresponsive to stressors and fails to develop healthy resiliency.

The human stress response elicits a cascade of events that impact the brain, neurological system, and various endocrine glands and hormones, explaining its broad influence over health. The stress response begins with neurons experiencing environmental, relational, or emotional stressors and stimuli, translating the stimuli into messages, and sending those messages along pathways to various regions of the brain for interpretation and response. During these activities, the production of brain chemicals, known as neurotransmitters, are triggered. These same neurotransmitters deliver messages to other regions of the brain and other organs, leading to a whole body response. The adrenal glands (of the endocrine system) are one of the first organs to receive messages from neurotransmitters and in response, they produce hormones such as cortisol and epinephrine (adrenaline). These hormones are responsible for the traditional “fight-and-flight” response to traumatic or dangerous stressors. While this response is helpful if we need to dodge a ball or car accident, chronic activation of the adrenal hormones can weaken the health of the immune system, the gut, energy systems, and pain perception, contributing to various health issues such as irritable bowel syndrome, chronic fatigue syndrome, and fibromyalgia. When the stress response is over activated during childhood, it becomes hypervigilant and has difficulty maintaining balance in adulthood.

All about the adrenals & the delicate triad

The adrenal glands are not the only organs responsible for receiving and responding to messages from the brain. The hypothalamus, pituitary and adrenal glands form a delicate triad (known as the HPA axis) that collectively acts to maintain a well-balanced hormone response to stress and trauma. This entire system is shaped during infancy and childhood. In a supportive environment this system learns to regulate normal cortisol patterns (which rise and fall) throughout the day. This hormone is associated with wake/sleep patterns, pain perception, metabolism, memory, and energy. Trauma and abnormal stressors during childhood rob the HPA system of the opportunity to learn normal cortisol patterns. As a result, the HPA axis is dysregulated and this condition endures throughout adulthood. Chronic pain and mood disorders are commonly connected to a dysregulated HPA axis which cannot maintain healthy cortisol patterns in the body.

According to the National Child Traumatic Stress Network, the most common traumatic stressors affecting children include, accidents, physical trauma, abuse, neglect, and exposure to domestic and community violence. Other impactful stressors include death of a family member, divorce, drug or alcohol abuse, and natural disasters. When encountered during childhood, these traumatic stressors precondition the neurological system and the stress response system to produce exaggerated responses to normal stimuli. Fibromyalgia and irritable bowel syndrome are two examples of hypervigilant neurological responses. Normal stimuli such as wind blowing in the face or clothing rubbing against the skin can produce painful sensations in those with fibromyalgia, illustrating an exaggerated pain response. Normal stressors triggering the neurological system to inappropriately stimulate the muscles of the intestine, leading to alternating constipation and spastic diarrhea, is a classic sign of irritable bowel syndrome. The pain response is also heightened in those with irritable bowel syndrome, causing abdominal pain. In addition, anxiety and depressive disorders as well as learning and behavioral problems may arise from both the neurological hypervigilance, but also from a heightened pain response which affects the emotions and further increases the activity of negative pathways in the brain. 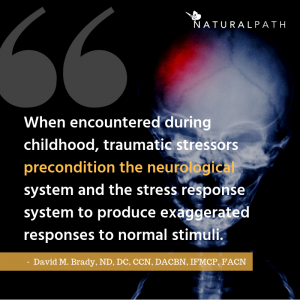 Specific causes of conditions associated with chronic pain and fatigue

Currently, specific causes of conditions associated with chronic pain and fatigue, such as fibromyalgia and chronic fatigue syndrome, are unknown; however, nearly two decades of research has strongly pointed to early childhood stressors as significant risk factors for initiating these conditions. While not every child who has been exposed to traumatic stressors will experience emotional and physical health calamities, research shows that children exposed to traumatic events or long-standing stressors are 2.7 times more likely to experience functional somatic conditions (functionally debilitating conditions for which no distinct cause can be determined), such as fibromyalgia, chronic fatigue syndrome, chronic pain, irritable bowel syndrome and others. As alluded to earlier, these conditions also commonly exist with psychiatric conditions such as anxiety, depression, and symptoms that mimic posttraumatic stress disorder (PTSD). Behavioral and cognitive deficits are often noted later in life, but are rooted in early childhood trauma and stress. The age at which trauma or stress is experienced, its duration, and even the type of trauma does not appear to shift this alarming statistic.

Consider this in support of health and healing

Considering the increasing prevalence of functional somatic conditions, emotional, and psychiatric problems, it is important to consider the influence of childhood experiences in the development of these conditions. Dwelling upon past trauma is not always helpful in supporting health and healing, and may actually be counterproductive; however, understanding its influence upon health is helpful in being able to appropriately identify elusive health conditions such as fibromyalgia. It is also important to understand for the purpose of protecting future generations from the debilitating effects of childhood trauma and stressors. Finally, it serves as a good illustration of the success of a functional medicine approach, which relies on a thorough health and lifestyle history to put together the “story” of an individual’s health and gain insight into the root causes of health problems.

Dr. Brady’s new book, The Fibro Fix, will give you a wealth of information on how to negotiate your way toward getting the proper diagnosis and the proper treatment for your symptoms of widespread pain and fatigue.   The book can be ordered on Amazon, Barnes & Noble, Books-A-Million and other fine book vendors, or at FibroFix.com. Also, learn more about The Fibro Fix Summitwhere Dr. Brady interviews 30+ experts on FM at FibroFixSummit.com. 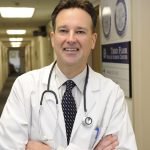 David M. Brady, ND, DC, CCN, DACBN, IFMCP, FACN, has 28 years of experience as an integrative practitioner and over 24 years in health sciences academia. He is a licensed naturopathic medical physician in Connecticut and Vermont, is board certified in functional medicine and clinical nutrition, a fellow of the American College of Nutrition, and completed his initial clinical training as a doctor of chiropractic. Dr. Brady has been the chief medical officer of Designs for Health, Inc. and also currently serves as the chief medical officer for Diagnostic Solutions Labs. He is the long-time director of the Human Nutrition Institute, and associate professor of clinical sciences at the University of Bridgeport in Connecticut. He has appeared on the plenary speaking panel of some of the largest and most prestigious conferences in the field including; IFM, ACAM, A4M, ACN, IHS, AANP, AIHM and many more. He is in clinical practice at Whole Body Medicine in Fairfield, CT, specializing in functional, nutritional and metabolic medicine.