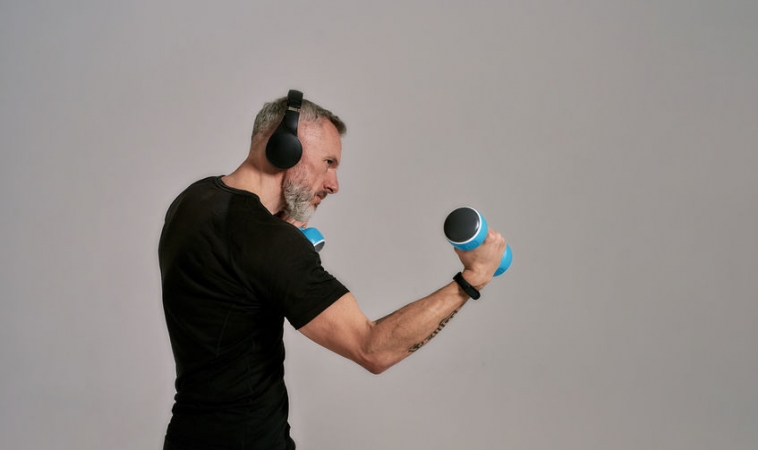 A 10-week muscle-building and dietary program involving 50 middle-aged adults found no evidence that eating a high-protein diet increased strength or muscle mass more than consuming a moderate amount of protein while training. The intervention involved a standard strength-training protocol with sessions three times per week. None of the participants had previous weightlifting experience.

Published in theAmerican Journal of Physiology: Endocrinology and Metabolism, the study is one of the most comprehensive investigations of the health effects of diet and resistance training in middle-aged adults, the researchers say. Participants were 40-64 years of age.

The team assessed participants’ strength, lean-body mass, blood pressure, glucose tolerance and several other health measures before and after the program. They randomized participants into moderate- and high-protein diet groups. To standardize protein intake, the researchers fed each person a freshly cooked, minced beef steak and carbohydrate beverage after every training session. They also sent participants home with an isolated-protein drink to be consumed every evening throughout the 10 weeks of the study.

“The moderate-protein group consumed about 1.2 grams of protein per kilogram of body weight per day, and the high-protein group consumed roughly 1.6 grams per kilogram per day,” said Colleen McKenna, a graduate student in the division of nutritional sciences and registered dietician at the University of Illinois Urbana-Champaign who led the study with U. of I. kinesiology and community health professor Nicholas Burd. The team kept calories equivalent in the meals provided to the two groups with additions of beef tallow and dextrose.

The study subjects kept food diaries and McKenna counseled them every other week about their eating habits and protein intake.

In an effort led by U. of I. food science and human nutrition professor Hannah Holscher, the team also analyzed gut microbes in fecal samples collected at the beginning of the intervention, after the first week — during which participants adjusted to the new diet but did not engage in physical training — and at the end of the 10 weeks. Previous studies have found that diet alone or endurance exercise alone can alter the composition of microbes in the digestive tract.

“The public health messaging has been that Americans need more protein in their diet, and this extra protein is supposed to help our muscles grow bigger and stronger,” Burd said. “Middle age is a bit unique in that as we get older, we lose muscle and, by default, we lose strength. We want to learn how to maximize strength so that as we get older, we’re better protected and can ultimately remain active in family and community life.”

Burd and his colleagues hypothesized that getting one’s protein from a high-quality source like beef and consuming significantly more protein than the RDA would aid in muscle growth and strength in middle-aged adults engaged in resistance training. But at the end of the 10 weeks, the team saw no significant differences between the groups. Their gains in strength, their body fat, lean body mass, glucose tolerance, kidney function, bone density and other “biomarkers” of health were roughly the same.

The only potentially negative change researchers recorded between the groups involved alterations to the population of microbes that inhabit the gut. After one week on the diet, those in the high-protein group saw changes in the abundance of some gut microbes that previous studies have linked to negative health outcomes. Burd and his colleagues found that their strength-training intervention reversed some of these changes, increasing beneficial microbes and reducing the abundance of potentially harmful ones.

“We found that high protein intake does not further increase gains in strength or affect body composition,” Burd said. “It didn’t increase lean mass more than eating a moderate amount of protein. We didn’t see more fat loss, and body composition was the same between the groups. They got the gain in weight, but that weight gain was namely from lean-body-mass gain.”

Burd said the finding makes him question the push to increase protein intake beyond 0.8-1.1 grams per kilogram of body weight, at least in middle-aged weightlifters consuming high-quality animal-based protein on a regular basis.

McKenna said the team’s multidisciplinary approach and in-depth tracking of participants’ dietary habits outside the laboratory makes it easier to understand the findings and apply them to daily life.