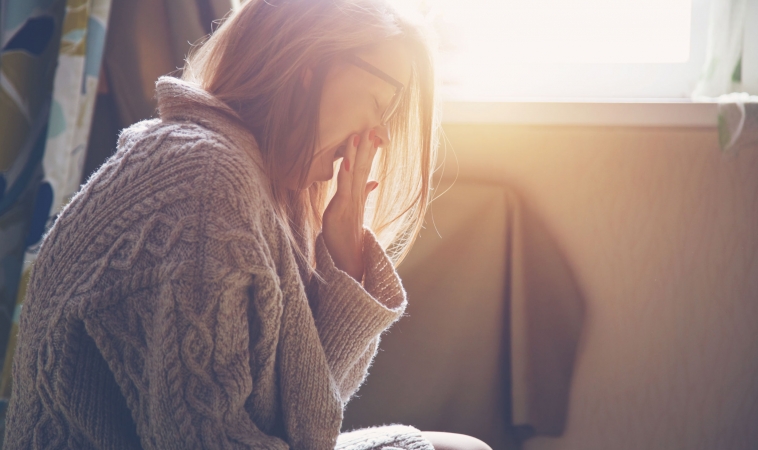 What is the thyroid and what does it do?

When the thyroid isn’t functioning properly

Hypothyroidism occurs when the body isn’t producing enough thyroid hormone. This can be an issue with low T4, T3 (meaning the body isn’t able to create T3 from T4) or both. Patients with hypothyroidism commonly experience fatigue, weight gain, constipation, dry skin, feeling colder than others, hair loss, irregular menstrual cycles, and more. The majority of cases of hypothyroidism are caused by an autoimmune disorder called Hashimoto’s thyroiditis, which can be diagnosed by a simple blood test. This condition affects 14 million people in the United States alone. Hyperthyroidism occurs when the body is over-producing T4, T3 or both, and can result in weight loss, increased heart rate, insomnia, anxiety, diarrhea, excessive sweating and more. Some patients’ hyperthyroidism is caused by an autoimmune disease called Graves’ Disease.

Fatigue and Your Thyroid

Approximately ⅔ of people with fatigue have an identified cause. One common cause of fatigue is thyroid disorders including both hypothyroidism and hyperthyroidism. Fatigue, which is caused by hypothyroidism, can result simply from not having enough thyroid hormone for the processes it is responsible for within the body. Fatigue, which is caused by hyperthyroidism, can result from the symptoms of insomnia and anxiety – people feel like they are hyped-up and they run out of energy during the day. Generally, the fatigue is quite significant, to the point where some people struggle to function in their everyday lives. However, once they work with a medical provider to start an appropriate regimen to address their thyroid disorder, the fatigue will improve. It is important to understand which specific part of the thyroid hormone pathway is not working properly. This is where proper thyroid testing becomes crucial.

It is important to thoroughly test the thyroid to ensure that each step in the pathway the body uses to produce thyroid hormone is functioning properly. When any of the steps in the thyroid hormone pathway are not functioning properly, one will experience symptoms. Most providers will order a Thyroid Stimulating Hormone (TSH) as an annual screening for their adult patients. However, this is just one step in the process, and prone to misinterpretation. What if the problem occurs further down the pathway? Most Naturopathic Physicians will order Thyroid Stimulating Hormone (TSH), Free and Total Thyroxine (T4), Free and Total Triiodothyronine (T3), Reverse T3 and thyroid antibodies to include Thyroid Peroxidase Antibody (TPO), which can be detected in either Hashimoto’s Thyroiditis or Graves’ Disease and Thyroglobulin antibody (TGAb) which can be detected in Hashimoto’s Thyroiditis. By running all of these lab tests, we are able to see which sections of the pathway may be under or over functioning and create a better, more individualized treatment plan for each patient. Each of these lab tests have specific values to distinguish a “normal” from an “abnormal” result. However, at times, patients may have many of the symptoms of hypothyroidism but when their thyroid labs such as a TSH are checked, they are considered to be in the normal range (between 0.5 mIU/L – 4.5 mIU/L). The majority of my patients feel their best when their TSH is between 1 mIU/L -2 mIU/L and their T3 and T4 are in the upper 30-50% of the normal range. Patients with a TSH between 2 mIU/L – 4.5 mIU/L are technically in the “normal” range but many suffer from fatigue and other symptoms of hypothyroidism. We call this subclinical hypothyroidism and when we give these patients thyroid supportive therapy (pharmaceutical, nutritional supplements, herbs or some combo of the above), they start to feel much better. 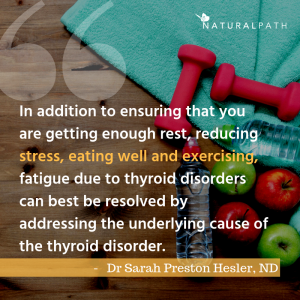 The Naturopathic approach to addressing thyroid issues (including fatigue!)

In addition to ensuring that you are getting enough rest, reducing stress, eating well and exercising, fatigue due to thyroid disorders can best be resolved by addressing the underlying cause of the thyroid disorder. If the thyroid disorder was initially caused by an infection, addressing and treating the chronic infection while giving appropriate thyroid supportive therapies will be more effective than simply treating the thyroid alone. If the patient is dealing with hypothyroidism (including Hashimoto’s Thyroiditis), I will generally give thyroid replacement medication such as Levothyroxine. Patients on Levothyroxine (Synthroid) alone, who are still experiencing symptoms of fatigue, hair loss, weight gain, constipation and dry skin, benefit from adding T3 in the form of the pharmaceutical Liothyronine, or some of the thyroid conversion co-factors.

Another alternative is to prescribe Nature Throid or Armour Thyroid which are both T4/T3 combinations instead of the levothyroxine/liothyronine combination. I may also recommend that the patient take a supplement containing co-factors, meaning nutrients which stimulate the body to produce T4 and convert T4 to T3. These include Magnesium, Zinc, Selenium, Iodine and antioxidants. If a patient would prefer to avoid medication (and they can do so safely), providing these co-factors are oftentimes enough to improve their symptoms and elevate their thyroid levels into a healthy range.

Many people who have Hashimoto’s Thyroiditis also have Celiac Disease, which is an autoimmune disease causing an extreme intolerance to gluten. This is probably because the gluten molecule is structurally similar to the thyroid molecule and when the body is already in the process of attacking the thyroid, introducing a molecularly similar structure can aggravate the attack. Many patients with autoimmune diseases also find benefit from a medication called Naltrexone, given in a very low dose. I regularly see both of these interventions result in lowered antibodies and improved quality of life for my patients!

Treatments for Hyperthyroidism include anti-thyroid medication, anti-thyroid herbs, and radioactive iodine which causes the thyroid gland to shrink. Medication such as beta blockers can also be given to address symptoms of hyperthyroidism, though this generally does not address the underlying issue. When we optimize thyroid hormone levels and reduce antibodies, patients feel better: fatigue, insomnia and anxiety lift, body weight regulates, and improved mental clarity result.

If the patient’s fatigue and other symptoms are not improving, even though their thyroid labs are in a normal range, we must investigate for other causes of fatigue such as depression, anemia, an acute or chronic infection, cardiovascular disease or an adrenal issue. Fatigue due to a thyroid disorder can be frustrating and difficult to manage but by working closely with a provider who knows how to treat the root cause of the fatigue, such as a Naturopathic Physician, you will heal! 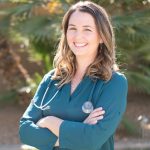 Dr. Sarah Preston Hesler, ND received her medical degree from the Southwest College of Naturopathic Medicine and currently practices in the state of Arizona. She is a founding member and the Director of Operations for Naturopaths Without Borders (NWB), and is on faculty at A.T. Still University. Dr. Preston Hesler lectures throughout the United States and works with NWB in the Phoenix area, Mexico, Haiti and Thailand. She was a 2011 co-recipient of the SCNM Alumni Award for Community Service, was instrumental in winning the Emerson Grant for NWB in 2013 and received the American Association of Naturopathic Physicians’ President’s Award in 2018. Dr. Preston Hesler sees patients privately at Phoenix Natural Family Medicine in Tempe, AZ (www.phxnfm.com), Regenerative Health Group in Mesa, AZ (www.regenerativehealthgroup.com), and BlueStone Therapy in Scottsdale, AZ (www.bluestonetherapyaz.com)