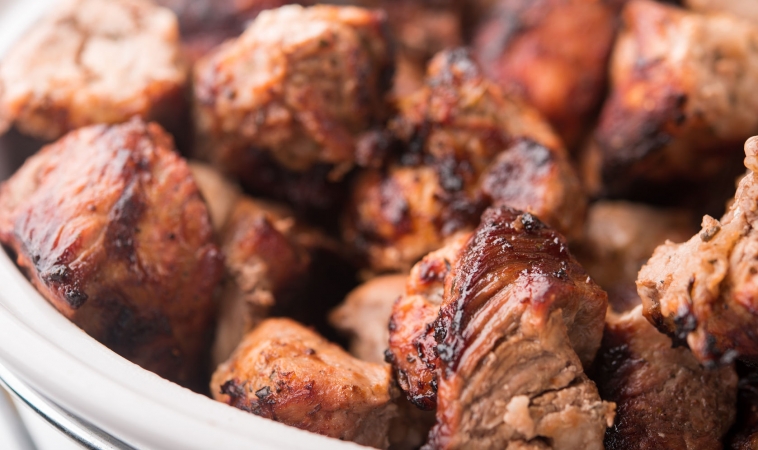 A recent study published in the Journal of the National Cancer Institute supports limiting grilled, barbecued and smoked meat intake for individuals at risk for or with a previous diagnosis of breast cancer(1). The study specifically shows a significant link between high-temperature cooked meat and the survival time after breast cancer diagnosis.

Meats cooked at high temperature – charred meats, grilled, barbecued or smoked meats – contain high amounts of polycyclic aromatic hydrocarbons (PAHs) and heterocyclic amines (HCAs), both known carcinogens(2). Cooking meats at high temperature, especially the charring of meat is well documented as a risk factor in developing various types of cancer, such as prostate(3), and colorectal cancer(4). The current study, specific to breast cancer survivors, might well be interpreted as a warning to other types of cancer survivors as well.The study looked at 1508 women with breast cancer. All participants were interviewed regarding their consumption of four types of grilled, barbecued, and smoked meat during each decade of their life. At the five year follow-up after breast cancer

The study looked at 1508 women with breast cancer. All participants were interviewed regarding their consumption of four types of grilled, barbecued, and smoked meat during each decade of their life. At the five year follow-up after breast cancer diagnosis they repeated the same questionnaire. Findings showed that of the 597 deaths at the five-year follow-up, 40% were related to breast cancer, and that continued high intake of high-temperature cooked meats post-diagnosis conferred a 23% increased hazard of breast cancer-specific mortality. The overall increased hazard for mortality in this group was 31%, further underlining the concern for these foods in a more general context.

Grilled, barbecued and smoked meats are often consumed in summer months during social events which may in themselves be very supportive to a sense of community and support benefiting cancer survivors. Being aware of the potential hazard of these types of meats is important, and limiting intake wherever possible.