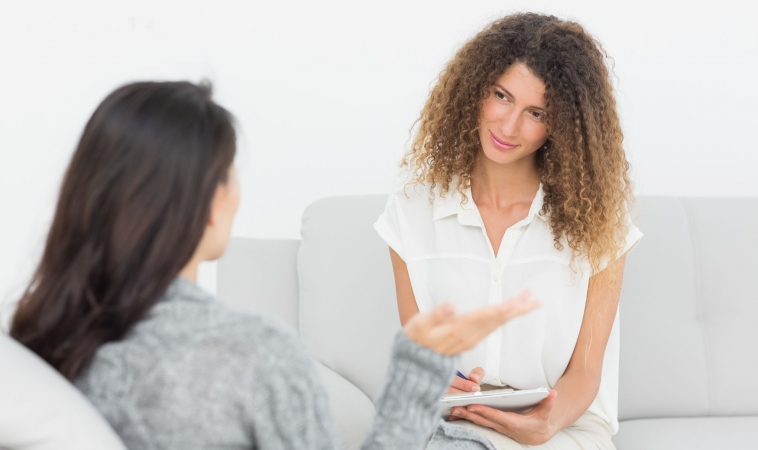 Lauren Walls has lived with panic attacks, nightmares and flashbacks for years. The 26-year-old San Antonio teacher sought help from a variety of mental health professionals — including spending five years and at least $20,000 with one therapist who used a Christian-faith-based approach, viewing her condition as part of a spiritual weakness that could be conquered — but her symptoms worsened. She hit a breaking point two years ago, when she contemplated suicide.

In her search for help, Walls encountered a psychiatrist who diagnosed her with post-traumatic stress disorder. As a result, she sought out a therapist who specialized in trauma treatment, and that’s when she finally experienced relief. “It was just like a world of difference,” Walls said.

Seeing herself as someone with PTSD was odd at first, Walls recalled. She isn’t a military veteran and thought PTSD was a diagnosis reserved for service members. But her psychologist, Lindsay Bira, explained that she likely developed the mental disorder from years of childhood abuse, neglect and poverty.

PTSD has long been associated with members of the military

PTSD has long been associated with members of the military who have gone through combat, and with first responders who may face trauma in their work. It’s also associated with survivors of sexual assault, car accidents and natural disasters. Researchers have also found that it can develop in adults who’ve experienced chronic childhood trauma — from physical, emotional or sexual abuse by caregivers, to neglect or other violations of safety.

Walls was fortunate to find a therapist trained to treat PTSD. Outside of military and veterans’ health facilities, finding knowledgeable help is often difficult.

Small portion of mental health professionals in the U.S. are trained in these two key therapies

Only a portion of the more than 423,000 mental health counselors, therapists, psychologists and psychiatrists in the U.S. are trained in two key therapies, called Cognitive Processing Therapy (CPT) and Prolonged Exposure (PE) therapy. These are treatments recommended as part of a patient’s care by the American Psychiatric Association and the Department of Veterans Affairs, which has studied treatments for PTSD since it affects many service members.

A third of psychotherapists had PTSD training

There is no definitive tally of people trained in these therapies, and neither the American Psychiatric Association nor the American Psychological Association tracks this data. A 2014 study by the Rand Corp. found that only about a third of psychotherapists had the training. The VA says over 6,000 of its therapists have, although rosters for the CPT and PE organizations list just a few hundred total practitioners.

Nonetheless, the VA’s National Center for PTSD wants to expand access to these treatments, and regional groups, including those in Texas, are following its lead. Texas has a need for more PTSD providers: It ranks No. 2 nationwide for its number of human-trafficking victims; it’s the leading state for refugee resettlement; it has the most unaccompanied child migrants of any state; and Texas is second only to California in the number of military service members — all factors that raise the risk of PTSD.

UT Health San Antonio, a University of Texas medical school and hospital, teaches community mental health providers how to provide the two PTSD therapies through its Strong Star Training Initiative. Funded by the Texas Veterans + Family Alliance grant program and the Bob Woodruff Foundation, it has trained 500 providers since it started in 2017. Most training takes place in San Antonio, and many of the mental health professionals who participate are Texas-based, though they also come from Florida, Illinois and other states.

In February, about 20 therapists gathered in a conference room at the medical school for instruction. Calleen Friedel, a San Antonio-based marriage and family therapist, was one of them. She said she is seeing more people with PTSD and often feels inept at helping them.

“I would just do what I know and do my own reading,” Friedel said. “And what I was taught in graduate school, which was, like, over 20 years ago.”

The group learned about one of the mainstream therapies, Prolonged Exposure therapy, which gradually exposes patients to trauma memories to help reduce PTSD symptoms. Strong Star also teaches Cognitive Processing Therapy, which involves helping the patients learn to reframe their thoughts about the trauma. But both therapies — often referred to as “evidence-based treatments” — have been slow to gain traction among psychotherapists because they’re closely scripted and differ from the common therapeutic approach to mental health issues.

Edna Foa, who created PE, said in a 2013 journal article that many psychotherapists believe delving into a patient’s inner life and history is central to their work. By contrast, highly structured evidence-based treatments — with their pre- and post-session evaluations and their focus on symptom relief — can seem “narrow and boring,” she wrote.

Some with PTSD claim treatments don’t work for everyone

Indeed, some people living with PTSD have complained that the treatments don’t work for everyone. But Foa and others argue the focused approach targets the brain’s mechanisms that cause PTSD symptoms, and symptom relief is what many living with PTSD want.

Edwina Martin, a psychologist in Bonham, Texas, said treatments like the ones she’s learning at Strong Star weren’t mainstream when she finished school more than 10 years ago. She now is employed at a VA health center after working for a decade in prisons, and she said she wants these in her “tool bag.”

The push to expand the workforce coincides with a growing understanding of trauma’s effects. The National Council for Behavioral Health, a nonprofit organization of mental health care providers, calls trauma a “near universal experience” for people with mental and behavioral health issues.

Many patients think PTSD is mostly a military problem

Because so many patients think that PTSD is mostly a military problem, Bira said, they encounter a roadblock to recovery.

“I get that all the time,” Bira said. “The beginning stages in treatment that I find with civilians are really about educating [them] about what PTSD is and who can develop it.”