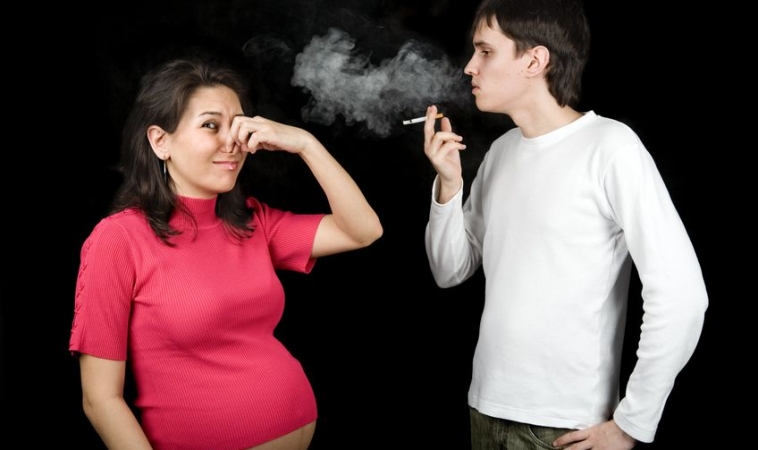 Nearly a quarter of pregnant women say they’ve been around secondhand smoke — in their homes, at work, around a friend or relative — which, according to new research, is linked to epigenetic changes — meaning changes to how genes are regulated rather than changes to the genetic code itself — in babies that could raise the risk of developmental disorders and cancer.

The study, published in Environmental Health Perspectives by researchers at Virginia Commonwealth University Massey Cancer Center, is the first to connect secondhand smoke during pregnancy with epigenetic modifications to disease-related genes, measured at birth, which supports the idea that many adult diseases have their origins in environmental exposures — such as stress, poor nutrition, pollution or tobacco smoke — during early development.

“What we recommend to mothers in general is that no level of smoke exposure is safe,” said study lead author Bernard Fuemmeler, Ph.D., M.P.H., associate director for population science and interim co-leader of the Cancer Prevention and Control program at VCU Massey Cancer Center. “Even low levels of smoke from secondhand exposure affect epigenetic marks in disease-related pathways. That doesn’t mean everyone who is exposed will have a child with some disease outcome, but it contributes to a heightened risk.”

Fuemmeler and colleagues analyzed data from 79 pregnant women enrolled in the Newborn Epigenetics Study (NEST) between 2005 and 2011. During the first trimester, all had a concentration of cotinine — a nicotine byproduct — in their blood consistent with low levels of smoke exposure, ranging from essentially none to levels consistent with secondhand smoke.

After these women gave birth, the researchers sampled the umbilical cord blood, which is the same blood that circulates through the fetus in utero, and performed what’s referred to as an epigenome-wide association study (EWAS) to search for correlations between blood cotinine levels of the mothers during pregnancy and epigenetic patterns in the babies at birth.

When cotinine levels were higher, the newborns were more likely to have epigenetic “marks” on genes that control the development of brain function, as well as genes related to diabetes and cancer.

These marks could mean either unusually many or unusually few molecules bound to the DNA strand, which affects how accessible a particular gene is. If a gene is bound up tightly by lots of marks, then it’s harder for molecular machinery to access and less likely to be expressed. On the other hand, if a gene is relatively unencumbered, then it might be expressed at higher levels than normal. Tipping the scale in either direction could lead to disease.

To solidify their results, the team repeated the analysis in a separate sample of 115 women and found changes to two of the same disease-related epigenetic regions — one that regulates genes involved in inflammation and diabetes and another that regulates cardiovascular and nervous system functions — are correlated with cotinine levels in mothers.

In all cases, the analyses controlled for race, ethnicity, age, prior number of children and maternal education.

“It highlights the importance of clean air,” said Fuemmeler, who is also a professor of health behavior and policy in the VCU School of Medicine and holds the Gordon D. Ginder, M.D., Chair in Cancer Research at Massey. “It’s important not only for our homes, but also in the environment. Clean air policies limit smoke in public, and for pregnant women that may have long-term effects on offspring.”