Getting the knack of NAC

N-Acetyl cysteine, often referred to as NAC, is an inexpensive, potent antioxidant with promising properties for improving and enhancing fertility in both men and women. The antioxidant and detoxifying effect of NAC is demonstrated by the fact that it still remains the treatment of choice for paracetamol/acetaminophen (Tylenol) overdose in many hospitals all over the globe.1 NAC is a stable form used in supplements of the amino acid Cysteine (cysteine is not very stable on its own in supplement form), with its powerful antioxidant effects attributed to its ability to help the production of the body’s master antioxidant, glutathione. The improved production of glutathione is important as it helps rid the body of oxidative stress, a state which has been implicated in the development of a number of diseases, such as cardiovascular disease, cancers and infertility.1,2

Sperm and ovarian eggs are highly susceptible to oxidative stress produced by our bodies in response to environmental triggers, such as smoking, pollution, and poor dietary choices. By enhancing glutathione and antioxidant environment of the body, NAC can help save these delicate fertility cells from becoming dysfunctional and damaged by these oxidative factors.2 Therefore, men and women who are experiencing difficulty with fertility can benefit from using NAC as part of their supportive treatment.

PCOS is a large contributor to fertility troubles in women, largely by the changes that happen to the body with this condition, including irregular or lack of ovulation, increased testosterone, and high susceptibility for diabetes (insulin resistance). NAC has been found to help women with PCOS improve their fertility outcomes by regulating blood sugar through improving insulin sensitivity and reducing high insulin as well as reducing testosterone levels in the blood.3 NAC can also help enhance the effects of fertility medications, particularly the ones that stimulate ovulation, making it a great therapy to use in conjunction with fertility medications in cases where they are needed.4,5 The evidence of NAC is so strong that a recent review and meta-analysis of the clinical trials on NAC found that women with PCOS who use NAC had higher rates of pregnancy and ovulation than compared to placebo.6

Because NAC is the form used in supplements only, dietary sources of NAC benefits come from naturally occurring cysteine. Because cysteine is an amino acid, foods naturally containing cysteine are mainly animal protein, such as chicken, turkey and duck. Vegetables that contain high amounts of cysteine include broccoli, onions, red peppers and oats. 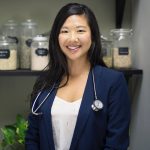 Dr. Tanya Lee, N.D. received her Honours Bachelor of Science degree in Biochemistry and Biomedical Sciences from McMaster University, and was trained as a Naturopathic Doctor at the Canadian College of Naturopathic Medicine.  Dr. Lee practices full-time between two clinics located in Toronto and Milton Ontario and has been voted Milton’s favourite Naturopath in 2013 and 2014.   Her primary care practice focuses on family medicine, treating a wide variety of conditions such as hormonal (endocrine) disorders, fertility, digestive problems, cardiovascular disease, diabetes, insomnia and fatigue.  She has a special interest in the treatment of autoimmune diseases, pediatric and perinatal health.  Tanya offers her clinical knowledge to a number of publications, including the Natural Path.