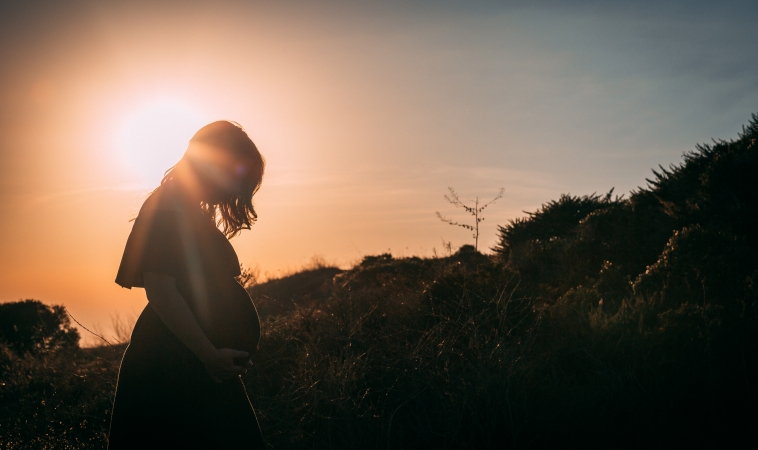 Changes in circulation, resulting in swelling, varicose veins and hemorrhoids, are common during pregnancy. It’s no wonder, with an increase in body weight from the fetus and surrounding fluid, extra pressure is added onto organs and other structures like the weaker-walled veins.

About 40% of pregnant women will be affected, and symptoms can show as early as the first trimester but may be more prominent by the third trimester.1 Commonly, women experience lower leg cramping or pain with onset in the evening or as the day progresses; especially if they are standing or on their feet most of the day. Other symptoms include numbness, tingling, or heavy, achy legs.1

How is circulation affected by pregnancy?

First, it’s important to understand the structure and function of veins and the valves within them. Valves are present in veins to prevent blood from flowing backwards. When a vein valve in the legs weakens, it’s more difficult to keep blood moving forward and upward. This can lead to pooling of blood within the veins as the vein becomes distended as its walls stretch and sag.1 When volumes of blood pool in this way it leads to major issues in lower limb circulation.

The veins in the legs are most affected because they have to work harder against gravity. Though in pregnant women, it’s common to see the development of hemorrhoids and vulvar varicosities due to the increased pressure within the pelvis from the fetus.1

Venous blood pressure is also affected when excess pressure is put on the inferior vena cava (IVC), located on the right side of the body. The IVC receives blood from the lower limbs and brings it back to the heart. Therefore, any compression here will increase blood pressure in the leg veins even more and increase the risk of developing varicosities.1 This may be one reason women favour laying on their left side vs their right: the collapsibility of the right-sided IVC, which can be uncomfortable compared to the more compression-resistant left-sided aorta, a major artery with thicker and more muscular walls.2

Because of this anatomical difference, symptoms are generally first noted on the woman’s right side. For example, women may notice that their right ankle or leg will swell first before it is noticed on both sides.2

This same issues with circulation as above can then lead to what we call “venous insufficiency” and lower leg edema or oedema, where excess fluid collection leads to swelling of tissues: Blood that has pooled in the veins can be forced from the vein into the surrounding tissues of the ankles and lower legs.1

4 Ways to prevent and treat leg swelling and varicose veins

These are tall socks, knee-length or to the mid-thigh that have graduated pressure built in. They are tightest at the ankles, and gradually get looser further up the leg. This type of graduated compression helps encourage blood flow back to the heart by adding counter pressure.

A study in Italy reported that pregnant women who wore compression stockings regularly had less leg pain and an increased quality of life, compared to those who did not wear them, or didn’t wear them often.4

Historically, water has been believed to, and used to, promote healing. Water has the ability to both hold a temperature long enough for physical application, whether it be as a cold compress to decrease swelling, or as a warm compress to relax tissues and increase blood flow. As an immersion, however, it acts as a medium to provide relief from the force of gravity. In altering the environment with which the legs are submersed, water immersions hold a lot of potential as a treatment option.

This can be done in a few different ways: by standing in waist-high or chest-deep water; walking in water with the legs submersed; or even participating in an “Aqua-Fit” class (tailored to the abilities of the individual). These are all safe options in pregnancy and applicable for individuals at varying physical fitness levels.

One study looked at women who stood or walked in water (immersing their legs) for 20 minutes. It was reported that women in the water immersion group had significantly reduced leg swelling.1

Two other studies have looked at water immersion: One showed that a 45-minute aqua fit class was able to significantly reduce leg volume5, while the second showed that leg immersion for 20 minutes in pregnant women in their third trimester was successful in reducing lower limb edema.6

A study that tested two different reflexology techniques found that relaxing and lymphatic reflexology conducted on pregnant women led to significant reductions in leg symptoms, specifically edema, compared to women who were given instructions to rest. As well, the women in the reflexology groups were more satisfied with the intervention as opposed to rest only group.1

From the results above there are definitely options to help reduce leg symptoms and improve circulation despite the changes present in pregnancy. However, there is still benefit from altering standing/sitting behaviour. For example, symptoms are often worse, with increased venous insufficiency, when women stand for long periods of time. Breaks should be taken either with exercise, or by elevating the feet and legs. The study listed above that tested water immersion, also compared the results for women in their third trimester who instead elevated their legs for 20 minutes. The results were comparable between water immersion and leg elevation with a reduction in lower limb swelling.6

Although there are many other options available, including medications and surgery, these options may not be appropriate in pregnancy. Therefore, using practices such as water immersion, reflexology, leg elevation, and walking with compression stockings can offer a viable and safe option for reducing and treating circulation issues of the lower limbs in pregnancy. Rest, and breaks from standing in general, should also be encouraged.

Photo by Josh Bean on Unsplash