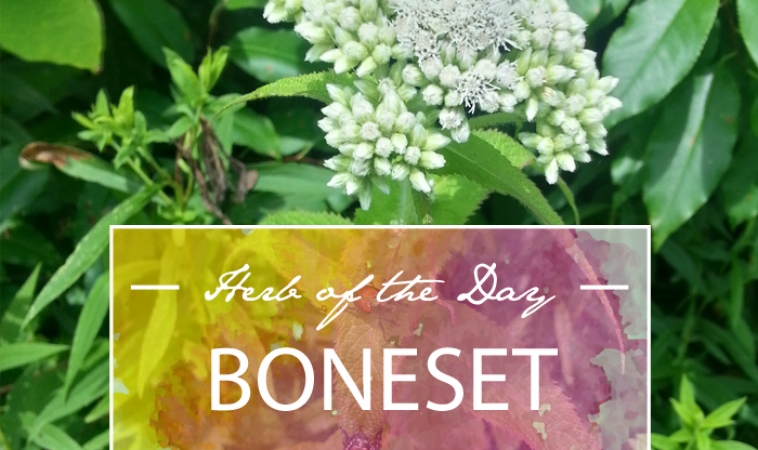 Boneset (Eupatorium perfoliatum), the sister to Joe-Pye Weed about which I’ve written, was literally across the street and already in my file of photographed plants. I looked for it numerous times while I was writing about Joe-Pye Weed, but only found it when I finished. C’est la vie! Another interesting tidbit about this particular photo is that I was just talking to my husband about the invasive Japanese beetle, and here they are, all over the Boneset.

When it comes to herbs, there are a lot of things that sound the same and it can be confusing to remember what makes each one different or similar. So here are a few connections that I made about other herbs in relation to Boneset. Boneset leaves are the source of the species name perfoliatum. There are two leaves conjoined at the same node so that it looks as though the stem pierces one leaf. Perfoliatum is not synonymous with perforatum, as in Hypericum perforatum (St. John’s Wort) which has leaves that look perforated with tiny little holes. Another herb that used to confuse me with Boneset is Comfrey, which is also known as Knitbone. But Boneset helps to decrease the deep-bone ache of the flu, while Comfrey heals wounds but not bones. Boneset is allegedly named for a specific influenza strain that was referred to as Break-Bone Fever.

Boneset also has other common names such as Thoroughwort and Ague-weed. It is antimicrobial, anti-inflammatory, anti-spasmodic, cooling diaphoretic, aperient, bitter and astringent. It is useful for any infection of the body, but has been especially associated with the influenza epidemic of 1918, as well as treating E. coli and Staph aureus specifically. It is immunostimulatory, decreases mucus congestion, and is a bitter digestive increasing bowel speed by increasing bile production. It can be used as a hot tea to encourage sweating and to break a high fever.

As a cold beverage, it can be used tonically and daily for dyspepsia, indigestion and general debility.

It should not be used in women who are pregnant or breastfeeding. Also, the dried herb is less toxic than the fresh, but still, large doses are emetic, causing nausea, vomiting, weakness, loss of appetite and thirst. This plant should be used for acute conditions in small amounts. An example amount would be a tea made with 1 teaspoon per cup of water and ½ cup drank every hour for fever, or 3-4 times daily for flu. Tonifying dosages would be once daily and cold.

Eupatorium perfoliatum is also a homeopathic remedy which covers symptoms in the same way that the herb does (not always the case in homeopathy). Specifically, it is beneficial for high fevers with deep bone-breaking aches, severe headaches, great thirst which precedes chill, and an inability to remain still although motion makes the pain worse. The patient is often moaning due to the severe pain they are experiencing.