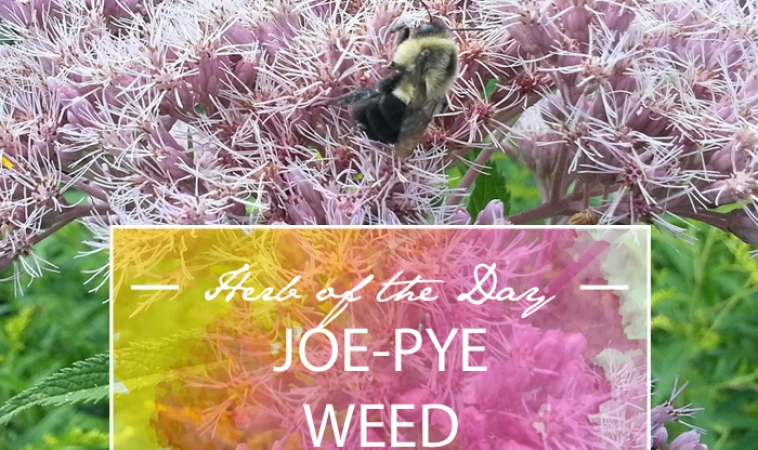 Joe-Pye Weed (Eupatorium purpureum or maculatum, sometimes listed as Eutrochium with the same species name) is yet another member of the Asteraceae family and which I mistakenly identified first as Boneset (Eupatorium perfoliatum). This plant is in the same genus, according to some sources, and the flowers look very similar, but the leaf arrangement is different. For Joe Pye Weed, the leaves are whorled, meaning there can be three or more leaves at the same node. The plants that I photographed had 5 leaves per node. Boneset’s leaves are significantly different and I’ll be keeping my eye out for them since it grows in this area as well.

Joe Pye was the name of the Native American doctor who taught early settlers how to use this plant for typhus or other fevers. But this plant also has other common names such as Purple Boneset, Purple Thoroughroot, Gravelroot, and Queen of the Meadow. However, since other plants share some of those common names, it is always safest to refer to a plant by its Latin Genus and species. For example, I still to this day can’t keep Devil’s Claw and Devil’s Club separate in my brain until I refer to the Genus (Harpagophytum and Oplopanax respectively).

The root of Joe-Pye Weed is typically the part used medicinally, but I have also seen references that uses the aerial flower and leaves for teas. It has the following actions: anodyne, alterative, antacid, antilithic, apertif, astringent, diaphoretic, diuretic, emetic, nervine, relaxant, and stimulant. For these reasons, I would definitely recommend this herb for kidney stones, gall bladder stones, urinary tract infections, irritable bladders, stress incontinence, bedwetting, gout, prostatitis, impotence or anything involving pain, congestion, or irritation of the genitourinary tract.

This is an invaluable plant for acute concerns, but should not be used in large amounts or for a long time because it contains pyrrolizidine alkaloids (PA). The PA in this plant is in smaller quantities than some other well-known plants such as Comfrey, but the caution to avoid use in pregnancy still stands. An example of acute usage would be one cup of the root decoction every 2 hours, or 5-15 drops of the tincture in a cup of water. The flowers and leaves can also be made into a tea and boiled down, then used as a cough syrup when molasses is added.

When Joe-Pye Weed is made into an alcoholic tincture, it is not uncommon for a resinous compound called eupurpurin to precipitate out of the liquid.