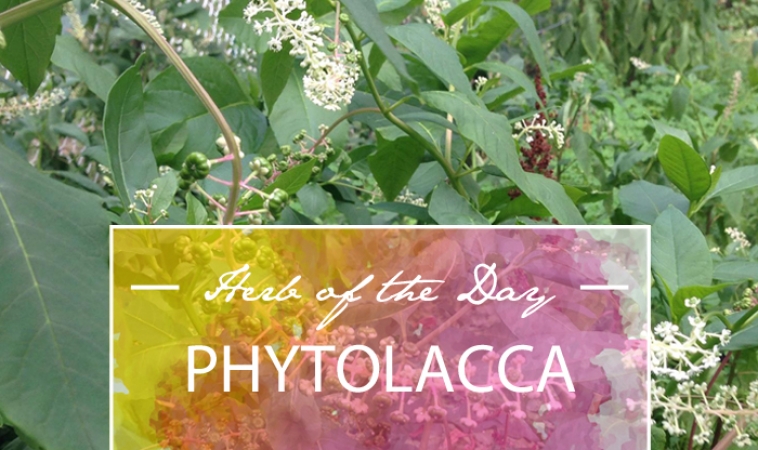 This beautiful picture was taken in the Buffalo area at the home of my wonderful midwife/friend Khristeena Kingsley. But as gorgeous as this plant is, it is one of the most toxic medicinal herbs. It is really one which you should only use as needed, in drop doses and only for as long as needed.

Amazingly, people consume this plant, usually referred to as Poke or Poke Salad. In order to do so, you have to pick the young shoots or leaves, boil, drain and rinse three times, then saute in oil for 35-40 minutes. My answer to that is, no thank you; no food should take that much effort to make it not kill you.

It is contraindicated with pregnancy, lactation and gastrointestinal irritation, and direct contact with the leaves can cause skin irritation. If you take too much of it, you can expect the following symptoms, with progressively more horrible symptoms only seen in higher or continued dosing: nausea, vomiting, burning in the mouth, nose and stomach, bloody diarrhea, tachycardia, incontinence, confusion, lethargy, stupor, convulsions or death by respiratory paralysis.

But now that I got all of the scary stuff out of the way, it is one of my favorite lymphagogues. I have recommended it both as a tincture internally and as an oil externally to rid the body of stubborn edema, or swollen lymphatic glands. The dried root is the part used for medicinal purposes and it is alterative, anti-inflammatory, anti-parasitic, emetic, lymphagogue, purgative, and antirheumatic.

Phytolacca has an affinity for lymphatics of the upper torso, axilla, neck and head, and is especially useful in swollen glands of the neck, tonsillitis and even mastitis. I would only recommend it for truly stubborn cases of mastitis though. It can be applied as an oil to the breast, but must be washed off thoroughly before the next nursing.

It is also a fantastic glandular alterative, specifically beneficial for throat, skin, lymph, buccal, tonsillar, testes and ovaries. Phytolacca is one of four ingredients in Turska’s formula, which is used for ovarian cysts, endometriosis and fibroids. This is a great herb for hypothryroidism because it helps to increase endocrine function, but not for Hashimoto’s hypothyroidism because it also increases immune function.

However, it is useful in those conditions in which a more responsive immune system is beneficial such as cancer, mononucleosis, otitis media, and mumps. It is one of the four herbs in the HEMP formula to boost a person’s recovery from such ailments. The other three herbs are Hydrastis (goldenseal), Echinacea, and Myrrh.