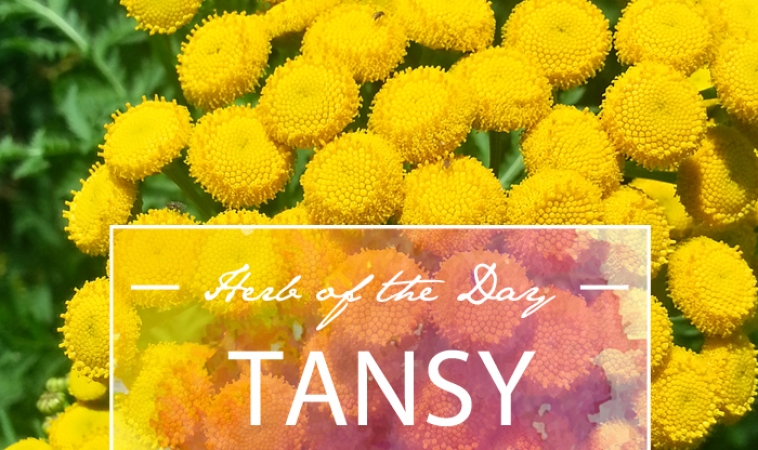 Tansy (Tanacetum vulgare) is in the same Genus as some other medicinal plants, but each one of them has different uses. Blue Tansy is Tanacetum annuum and is used as an essential oil for it’s anti-inflammatory, anti-allergenic, calming and relaxing properties. Feverfew is Tanacetum parthenium and is most well known for preventing and treating migraines, but is otherwise just a great anti-inflammatory.

This one is just called Tansy and it is both edible and medicinal. Eating too much is not advised, but it can be dried and used as a spice. One source said that the young leaflets could be eaten raw or cooked, in small quantities. I no longer have young plants around, but I just chewed a leaf and flower from my backyard and I don’t think it would be enjoyable raw. However, I imagine it would be enjoyable as a spice and I plan to go out later to harvest some for drying. It tastes somewhat earthy like sage, and pungent like clove.

Medicinally, Tansy kills ticks and mites (acaricide), fleas (pulicide), parasitic roundworms (ascaricide) and other pathogenic parasites and worms (vermifuge, anti-helminthic) and is a general insecticide and insect repellant as well. Growing it, or spreading it around dried will act as an insect repellant, especially if mixed with Elder leaves. It can also be used as an external wash for lice, fleas, and scabies. Before refrigeration, it used to be layered between pieces of meat to not only repel bugs, but also prevent decomposition of the meat while traveling. It also used to be placed in caskets for the same reason.

As one could imagine from the above, this would be a great herb for any intestinal bug. It is bitter, so it helps to stimulate normal peristalsis and digestive compounds to be released, but it’s also carminative, anti-flatulent, vulnerary, pain relieving and most importantly, bug killing. The essential oils of tansy include the compounds camphor, borneol and thujone which are insect killing, but also toxic to humans and other mammals in large doses. In small quantities however, it is considered a tonic herb.

Even though the actions of herbs are listed by their allopathic qualities, in general, herbs are more moderate in action than their pharmaceutical counterparts. When it comes to antimicrobial actions, the probiotic flora have adapted to regular usage of plant compounds. Obviously, a large dose of an herb can act like a pharmaceutical, but normal dosing does not kill non-pathogenic flora. Tansy is useful to heal from a cold, which fits more modern knowledge that the human gastrointestinal microbiome has a tremendous effect on our immune system. Tansy will decrease fever, increase sweating, and induce relaxation and relieve pain for nervous affections and hysteria.

Tansy is also a fantastic poultice or fomentation for any trauma or injury. It is antiseptic, antibiotic, vulnerary and is also useful for spasms, sprains, bruises,nerve pain, and arthritic pains such as those from gout, rheumatism or osteoarthritis.

This plant should not be taken by anyone who is trying to get pregnant or is currently pregnant because it is an emmenagogue and abortifacient. However, if you suffer from irregular periods or amenorrhea, this would be an excellent choice for an herbal remedy.