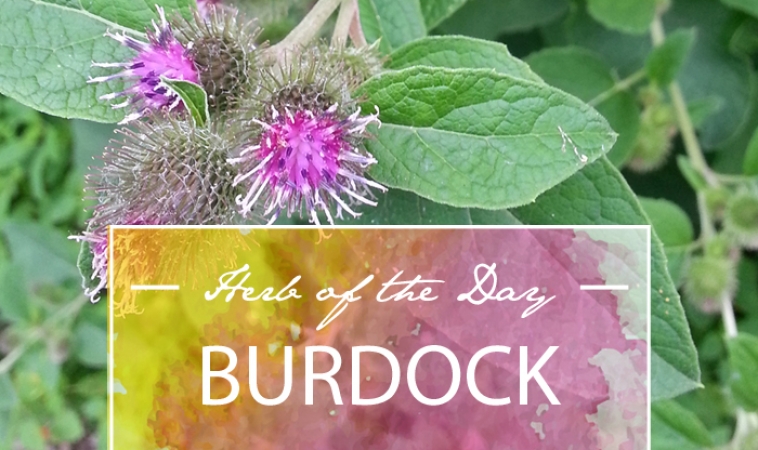 Burdock (Arctium lappa) is one of my favorite plants. I know I seem to say that about a lot of different plants, but that’s what happens when you discover their benefits. It’s edible, it’s medicinal, it’s gentle, and sometimes it seem like everyone could use some.

Burdock is sometimes called gobo in Asian grocery stores, but I’ve also seen it for sale in the most awesome grocery store ever. Those of you from Western New York know the one. It looks like a long, skinny, dark brown but almost black, hairy root vegetable. It is really dense too; moreso than a carrot-like hardness which you might expect. I have only ever used it in soups, so I washed and sliced the root into ¼ inch coins. I suppose fussier types might want to peel the black skin off, but I left mine on. It was pretty tasteless in the soup, but definitely gave a distinguishable texture to the softer vegetables. Burdock has a high mineral content, and is also known for being specifically high in iron, calcium, and vitamin A.

As medicinal plant, the root and seed are most commonly used, but the leaf is as well. The root contains inulin, which is a fructan, a type of sugar that is pre-biotic, meaning that it feeds beneficial bacteria. Therapeutic diets such as FODMAPS, GAPS and SCD would recommend against this plant as a food, but especially as a supplement. That’s a topic that is much too broad to be discussed here, but it suffices to say if you follow one of those diets, you will want to avoid burdock. The root also contains lignans, which are estrogen modulating compounds. Refer back to Red Clover if you need a refresher on estrogen modulators AKA phytoestrogens.

Burdock is an aperient, which means that it is a gentle laxative, the gentlest actually, and laxative is a pretty aggressive term when you compare aperients to other laxative actions. Aperients move the bowels by stimulating the release of bile from the liver and gallbladder (cholegogue). The increased bile in the intestines acts as a lubricant that makes stool move more easily. This stimulation of the digestive tract is helpful in any cases of maldigestion, but has also been used in anorexia.

It is an alterative, which means that it enhances the removal of metabolic waste from the extracellular space, lymph and blood, and therefore reduces low grade cellular inflammation. This enhances the removal of endogenous toxins and improves the delivery of nutrients. Herbs with this action are very beneficial to conditions due to weak circulation and impaired nutrition. It is a great tonic herb for skin disorders such as eczema, psoriasis, acne, and boils. It is most curative internally, but can also be used externally as a poultice or compress to heal current wounds and ulcers. Burdock’s antimicrobial action is attributed to polyacetylenes.

Burdock is also a gentle diuretic that is non-irritating for cystitis with burning pain with urination. In King’s American Dispensary, a book written in the mid-1800s during the Eclectic movement, burdock is said to be beneficial for “feeble cutaneous circulation; scaly, dry eruptions; impaired nutrition of skin; urinary irritation; psoriasis.” In addition, it is an ingredient in Essiac tea.

The root should be harvested in September or October after the leaves and stems start to die and the focus of the plant’s nutrients is on the roots and rhizomes.