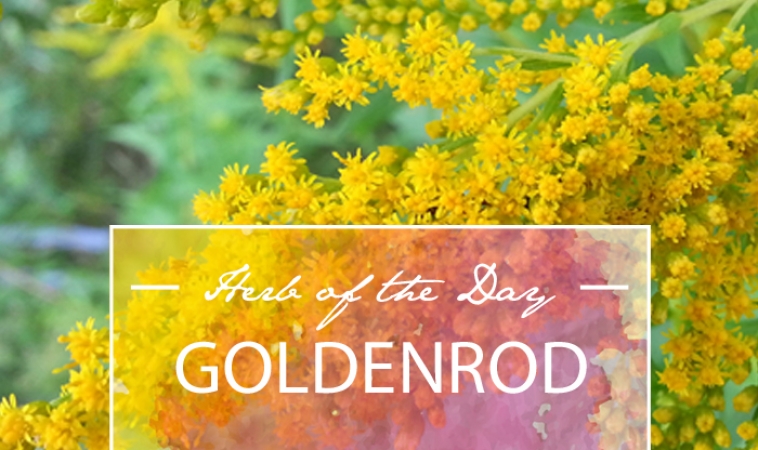 Goldenrod (Solidago canadensis) is unfairly maligned by those who experience summertime allergies. This plant cannot possibly be the source of respiratory symptoms in those afflicted because its pollen is not distributed by wind. It is a sticky pollen that requires direct contact for transport, like that provided by bees. One of the other wind-pollinated plants, such as ragweed is the more likely culprit. In other words, unless you are blowing your nose on Goldenrod flowers, it’s unlikely to cause your sneezing, etc. But maybe not even then, because it is also contains a large amount of quercitin, a bioflavinoid used in the treatment of allergies.

Plants that are medicinal, also tend to be edible because logically, if it is safe to consume when you are suffering from an ailment, it is safe to consume when you are healthy. Every plant though has an upper limit of dosage, beyond which side effects begin to occur. Being aware of cooking methods may also be important, as is the case with the most poisonous plant I’ve discussed thus far, phytolacca. In the case of Goldenrod, the young leaves and flowering stems can be eaten cooked and a tea can be made from the flowers or leaves.

Somewhere between medicinal and edible lies herbal vinegar. Susan Weed describes the purpose and method of creating herbal vinegars HERE and lists goldenrod as one of the herbs that works well as a vinegar. All of the aerial parts of the plant are used and are best harvested when it is in its budding stage.

Medicinally, Goldenrod is best known to be helpful to the urinary and respiratory tracts. It is considered a potent aquaretic, or a diuretic that preserves electrolytes while ridding the body of excess water. For anyone familiar with drugs like hydrochlorothiazide or furosemide, this is an amazing example of nature’s wisdom. Those diuretic drugs deplete the body of valuable potassium, which can cause weakness, fatigue, muscle cramps, constipation, and in the most severe cases, death.

An even more amazing action for this plant is that it is antifungal and can rid the body of oral Candida albicans as a mouthwash, or vaginal yeast infections when used internally or as a vaginal wash or suppository. Many women with a urinary tract infection end up with a yeast infection from the conventional treatment with antibiotics, but both can be treated with the same plant that restores balance to the body. Double bonus is that it also is beneficial for diarrhea and other symptoms of gastroenteritis, which can also be a consequence of antibiotic usage. So whether someone has or has not used an antibiotic, this herb will be beneficial in recovering from the initial infection, or the consequences of antibiotic usage.

The benefits of goldenrod don’t stop there either. Its use in wound and burn healing come from the hemostatic, styptic, and analgesic actions. In addition, the phytochemical rutin treats capillary fragility and the phenolic glycosides are anti-inflammatory. It is mild enough to use in children for any gut ailment because it is carminative, anti-helmintic, and astringent. Therefore it is strong enough to kill worms, stop diarrhea, gas and bloating, but is still mild enough to treat little humans.